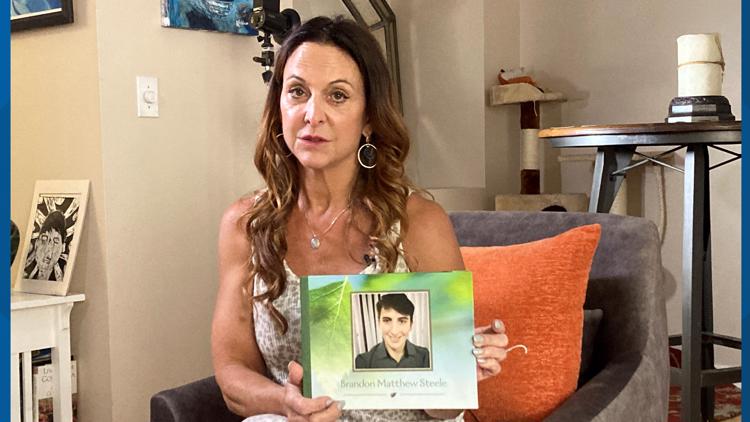 Brandon Steele was 21 when he died of a heroin overdose. Because he was an adult, his mother was shut out of his care. Now there’s a new effort to change that.

“He was a great artist, and he was just sweet and kind,” Steele said. “It’s just like when you say his name, it’s like he flashes across. I can see his face,” she said.

In middle school, she says her son started getting depressed and struggled with anxiety. In high school, she realized how serious it was.

“He said he had been buying a Xanax type of drug for anxiety from China, and that he needed to get off of it and couldn’t do it without a doctor. So that’s when he checked himself into rehab and he just turned 18.”

She says he left rehab on a host of medicines.

“You know a plethora of antidepressants, anti-anxiety meds and sleep meds, and which kind of worried us too,” Steele said. “I think we knew there were problems, but since he was over 18 we couldn’t really talk to the doctors.”

Shut out of his care because he was an adult, Steele like many parents of young adults didn’t know how dire the situation was.

“We just thought we had time,” she said.

Fighting back tears she remembers what he had told her.

“He said he would be there when we got old and needed him.”

It’s a grim reality a growing number of families are facing. Opioid overdoses killed about 50,000 people in 2019 according to the CDC and during the pandemic, the problem has only gotten worse. The CDC reports in 2020 more than 69,000 people died from opioid overdoses.

“I think I was in such shock,” Steele said. “I didn’t really believe it. It was almost like you felt like you could go back and change it like it can’t be true.”

Terrie Andrews, Ph.D. is Administrator of Baptist Behavioral Health and Wolfson Children’s Hospital. She said she has seen a huge spike in behavioral health emergency admissions especially among those between the ages of 16 to 26.

“Oh, my goodness, we’re up by, you know, considering both populations 200% as compared to pre-COVID, so just amazing numbers and people are really struggling right now,” Andrews said.

To help incorporate parents into their young adult’s care, Baptist Health has created a new position called a Dragonfly Care Coordinator, an initiative founded by Sheryl Johnson, the mother of 22-year-old Alex Newman, who died of a fentanyl overdose in 2017.

“They act as a conduit to be able to get the patient from point A to point B, help them with appointments, be a coach and a mentor. And also, most importantly, involve the parents in the care,” Andrews explained.

With the patient’s consent, the parents are notified every step of the way. Information Steele wishes she had.

“We couldn’t even talk to his doctors, we couldn’t talk to the therapist, who said you know he tried this, it was really serious once and every time I saw him, she said she was afraid she wouldn’t see him two weeks later,” Steele said. “If we had more information, he would be alive.”

Wolfson Children’s Hospital now has a 24/7 confidential helpline for kids and teens staffed by trained mental health experts. Call 904-202-7900 to reach the free helpline or text LIFE to 741741.

Right now, the Jim Moran Foundation is matching dollar-for-dollar donations to Alex’s Dragonfly Endowment for Young Adult Behavioral Health up to $750,000 to help those who are struggling.