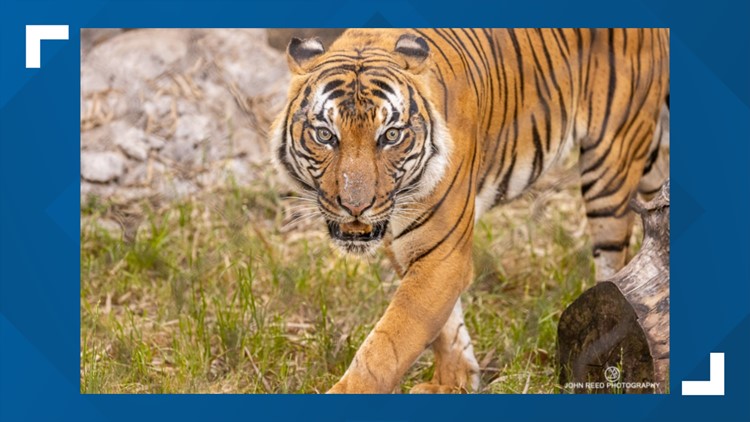 There are estimated to be less than 150 Malayan Tigers left in the wild.

The zoo announced the addition of Bashir, a 13-year-old, male critically endangered Malayan Tiger in a press release Tuesday.

The zoo says he actually arrived in early April and has been adjusting well to his new home.

“Bashir is acclimating nicely and at his own pace,” said Tirzah Nichols, Senior Mammal Keeper. “We pay close attention to his comfort levels in his new surroundings, monitor his progress and only introduce him to new areas when he is ready.”

The keeper staff at the Zoo say they have been spending time developing a positive relationship with Bashir and establishing trust while he settles into his new home.

According to the staff, Bashir is relaxed, but very charismatic, vocal and expressive. He enjoys his toys and exploring new environments.

Bashir joined the Zoo through the Species Survival Plan (SSP) between accredited zoos and aquariums. SSP looks at the genetics of captive populations to make the best pairings to ensure these endangered species thrive.

Bashir is recommended to breed with the zoo’s current Malayan female, Cinta.

There are estimated to be less than 150 Malayan Tigers left in the wild.

“Jacksonville Zoo and Gardens is excited to participate in such significant conversation efforts,” said Nichols. “With a critically endangered status, species like the Malayan Tiger can significantly benefit from our joined efforts with other institutions to help ensure their future survival.”

Bashir made his debut on May 5, in the award-winning Land of the Tiger exhibit.

RELATED: Millions of genetically modified mosquitoes could be released in Florida this year

Previous articleHannah Tubbs, trans child molester, pleads not guilty to murder, robbery charges
Next articlePeople Who Work In The Fashion Industry, We Wanna Hear Your Secrets And Stories