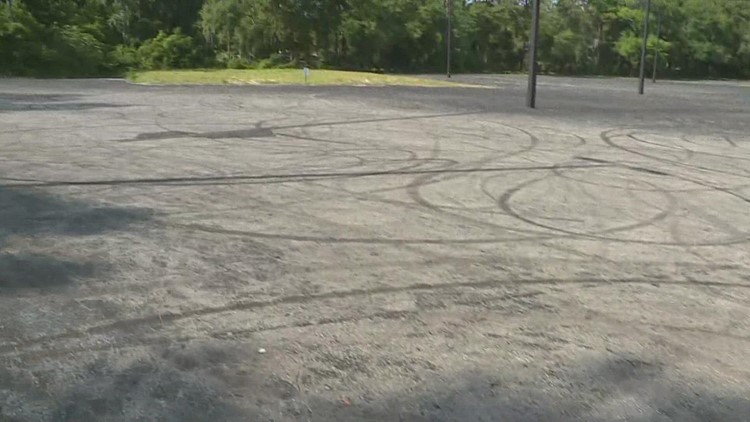 JACKSONVILLE, Fla. — Multiple arrests have been made related to car club meetups that the Jacksonville Sheriff’s Office says are creating dangerous situations for the club members and those around them.

JSO announced Monday that, in a partnership with the Florida Highway Patrol, it has made 11 arrests and written more than 200 traffic citations related to car meetups.

First Coast News has requested documentation that provides more information about these arrests and seizures. We will provide an update when that information is available.

Monday, there were still pieces of tires in the Roses Discount Store parking lot on Lem Turner Road from this weekend’s car club meet-up Saturday night. Store employees said it’s not the first time car groups have been there, but they said they come after the store closes.

#JSO released the following statement regarding the activities of some local car groups pic.twitter.com/JHNPz9Cc1N

RELATED: Jacksonville man thought loud noises were cars, until he felt warm sensation in his lower back

Some who attend the meetups say it’s an outlet for them, and they’re not hurting anyone.

Jacksonville City Councilman Al Ferraro is asking the city to get involved and help find an appropriate place for these clubs to do their gatherings legally.

In response to someone who spoke with First Coast News about a ‘safe space; for these meetups, Ferraro offered this comment:

“We are actually looking at that. We’ve had some organizations come in, talking about building racetracks and doing things like that. It is something that I’d like to see put in the city so people can do these things legally.”

A video shared on social media appears to show JSO officers pull a man out of a car to the ground and put handcuffs on him at the meet-up in the Roses lot. JSO said it’s also illegal to watch street racing, or to be a passenger in a car that’s racing.

First Coast News’ Crime and Safety Analyst Mark Baughman said it falls under the unlawful assemblies statute. It states “if three or more persons meet together to commit a breach of the peace, or to do any other unlawful act, each of them shall be guilty of a misdemeanor of the second degree.”

Penalties could include jail time and a permanent criminal record, he said.

JSO said “in an effort to curb the dangerous and destructive activities of some car clubs,” it partnered with the FHP. It said it creates dangerous situations for everyone, including bystanders.

“I know that some people up there have mixed opinions about it’s called the takeover scene or basically they do donuts at intersections and they do burnouts in parking lots, and I will tell you, 90 percent of these people are in their early 20s, still in high school,” someone who attends the meetups and wanted to stay anonymous said.

“They’re young kids, and something I’ll tell you what they are doing is illegal, but I have my argument against what the JSO department is doing and I think their brute force is a little bit excessive,” he said.

He maintained the meetups aren’t hurting anyone and are bringing people together.

“Cars are kind of like a sport to us, like skateboarding, skiing. It’s a thrill sport, but we need our own place to go to enjoy it, but the city won’t allow us, so we do what we can with what we have,” he said.

The Jacksonville Sheriff’s Office continues to ask members of the public to share information which they feel might be helpful. Information can be provided by calling 904-630-0500 or emailing JSOCrimeTips@jaxsheriff.org.

First Coast News reached out to JSO about car club members’ complaints that JSO was too physical in the arrests, and overreacted. FCN is waiting to hear back on that, and what the 11 people arrested are specifically charged with.

“Troop G remains committed to the safety & well being of our community,” said FHP on Twitter. “Troopers continue the steadfast enforcement of hazardous violations and dangerous activities on our roadways by recently issuing 157 arrests, warnings, & other civil/criminal charges relating to Racing.”

Troop G remains committed to the safety & well being of our community. Troopers continue the steadfast enforcement of hazardous violations and dangerous activities on our roadways by recently issuing 157 arrests, warnings, & other civil/criminal charges relating to Racing. pic.twitter.com/YSk7tBRn8T

RELATED: ‘This is an issue:’ Police investigating street takeovers in Jacksonville