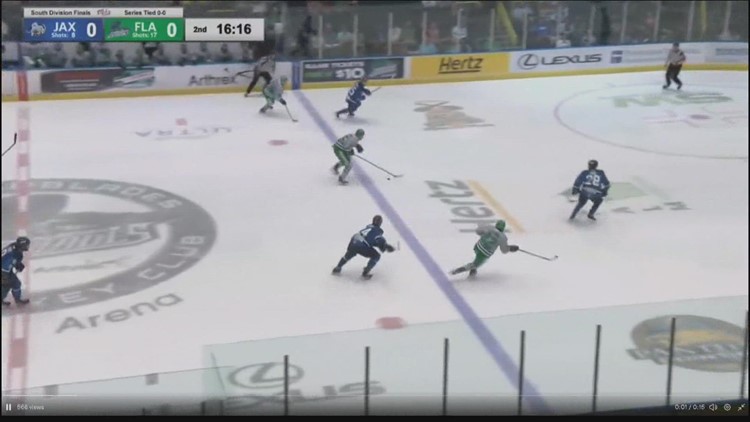 The Icemen lost in Game 1, but they’ll have another chance in Game 2 Saturday night.

ESTERO, Fla. — The Jacksonville Icemen and the Florida Everblades will meet on the ice for Game 2 of the South Division Finals Saturday at 7 p.m.

The Icemen are on the road again tonight at Florida’s home rink, Hertz Arena in Estero.

After a 2-0 loss Friday, the Icemen will give it another go and hopefully pick up their first win of the series.

Friday’s game started off with no score in the first period, with the Everblades’ Alex Aleardi making the first goal in the second.

The Icemen’s Francois Brassard had an impressive stop in the second, and in the third, Derek Lodermeier took his shot but was blocked by Everblades Goaltender Cam Johnson.

With 10 seconds left in the third, the Everblades scored their second goal on an empty-netter.

Friday’s effort by the Icemen just wasn’t quite enough to land the puck in the net, but Saturday’s a new game, and there’s a lot more game left to play.

Below is the full schedule:

Previous articleIf You Studied Abroad, Tell Me About The Wildest Culture Shocks You Experienced
Next articleCapitals rout Panthers in Game 3 to take 2-1 series lead