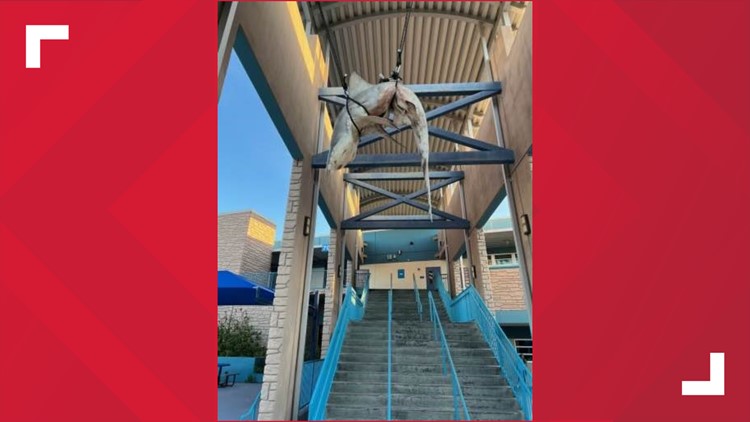 WARNING: This story contains graphic images that could be disturbing to some.

JACKSONVILLE, Fla. — WARNING: This story contains graphic images that could be disturbing to some.

A dead shark was found hanging from the ceiling at a St. Johns County school on Thursday morning.

Students posted photos of the gutted shark hanging from the rafters of Ponte Vedra High School on Snapchat. The incident was reportedly a senior prank.

First Coast News spoke with a junior at the school who said, “it was done by one of the kids at our school, a senior for a senior prank, and then he brought his friends from different schools to hang up the shark.”

The Florida Fish and Wildlife Conservation Commission says around 9 p.m. Wednesday night, a group of five high school students at Ponte Vedra High School hung a gutted shark on the rafters of the school courtyard.

FWC says it learned that the shark was harvested Tuesday night, gutted, and stored in a freezer prior to being hung.

Ponte Vedra High School staff disposed of the carcass prior to FWC notification, the organization says.

Photos have been sent to FWC marine fisheries biologists to identify the species of shark. FWC officers are investigating and conducting interviews.

One student said the dead shark made several students uncomfortable.

“Some people think it’s funny. I’m not sure why. I don’t think its funny,” he said.

There were rumors around school that the shark was pregnant, according to the student.

The animal was removed around 8 a.m. by custodians, according to St. Johns County Schools.

The school is investigating the incident.