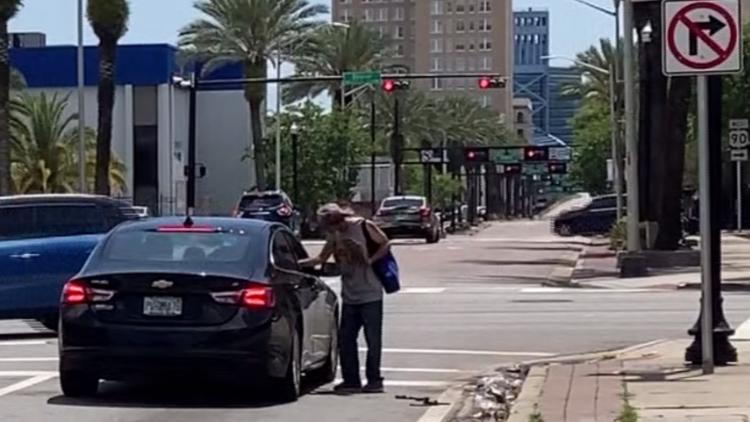 “We have law-abiding citizens that can’t even go through an intersection without being harassed or redirected, then that’s a problem,” said Ferraro.

JACKSONVILLE, Fla. — City Council Member Al Ferraro is pushing legislation to address panhandlers, something he calls a public nuisance and a risk for drivers.

Ferraro held a meeting Monday with city leaders and representatives from the Jacksonville Sheriff’s Office to address the problem.

Sabrina Wheeler says when pulling up to any given intersection in Jacksonville she’s seen people asking for money, sometimes even with children, and it has become an everyday thing.

“Our roads are very dangerous, they should not be out there for safety’s sake too… and now I’m thinking to myself where are my rights as a citizen? You know these people are a nuisance,” said Wheeler.

Wheeler came to a meeting held by Ferraro to voice her concerns. Ferraro and JSO leaders say the biggest issues are when panhandlers enter roadways, are near highways, or children are involved.

“We have law-abiding citizens that can’t even go through an intersection without being harassed or redirected, then that’s a problem,” said Ferraro.

But there’s a challenge with regulating panhandlers, as the CEO of Changing Homelessness explains, it’s a matter of protecting First Amendment rights.

“You can hold a sign that says anything on the sidewalk near a busy intersection and that is your right to do that,” said Dawn Gilman, CEO of changing homelessness.

In fact, a St John’s county ordinance against public begging was found unconstitutional by the U.S. District Court for the Middle District of Florida. Some citizens at the meeting also point out that school clubs and even firefighters can be seen asking for donations at intersections.

Ferraro is working with JSO and transportation agencies to put up ‘no trespassing and ‘no solicitation’ signage near intersections.

He and other city council members also say they are drafting legislation that would address panhandlers’ rights.

“We are concerned with what’s happening as far as the First Amendment with the people that are doing this, but we are also concerned with law-abiding citizens that are having to go through this, so, it’s something we’re walking through, and we’re trying to get a bill out that’s right,” Ferraro said.

“…We’re trying to fix the problem and we’re trying to get all the different roadways caught up as far as the federal city and state roads to find out what we have to do at each intersection.”

Ferarro plans to continue working on legislation that would meet the requirements, in the meantime, he’s urging citizens not to give money to panhandlers but rather to donate to a charitable organization of their choice.