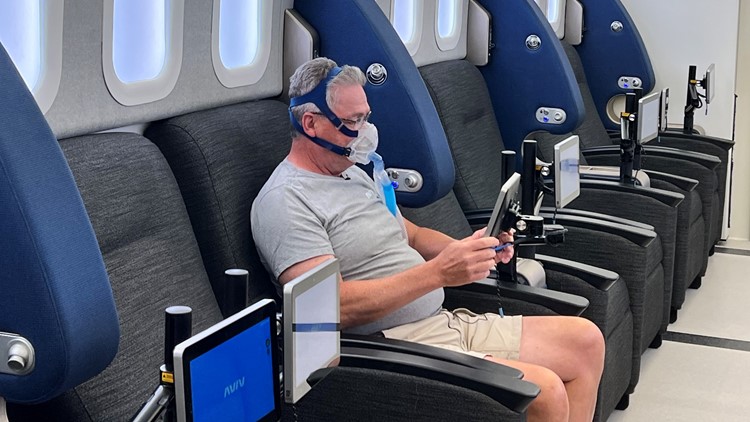 THE VILLAGES, Fla — It wasn’t until he was 55-years-old that Retired Army Colonel Andy Smith was diagnosed with Post Traumatic Stress Disorder (PTSD). While he says it wasn’t debilitating for him there were nightmares he couldn’t stop.

“Terrible dreams of incidents that happened in the past that just won’t go away,” Smith said. “I found four soldiers thrown out of the back of a dump truck and unfortunately the dump truck was on top of the fifth, and I stayed there with them until he passed. You don’t forget that.”

Last August Andy started a 12-week program at Aviv Clinics in The Villages.

Two hours a day, five days a week he sat inside a hyperbaric oxygen chamber that looks like an airplane cabin.

“Hyperbaric oxygen therapy basically uses 100% oxygen in a pressurized environment to get a significantly higher concentration of oxygen to cells that need it,” Dr .Mohammad Elamir.

Dr. Elamir, a board-certified internal medicine physician, says the treatment also includes cognitive training and a physical and dietary plan. While Andy was doing the hyperbaric oxygen therapy (HBOT) therapy he played games on a tablet to help stimulate parts of his brain.

“It turns out that PTSD is not just a psychological disease. It’s a brain physiology disease. There are changes in the brain as a result of the trauma of war, for example, even in the absence of physical trauma to the head,” Dr. Elamir said.

The treatment plan includes what they call ‘dives’ plus appointments with a team of health experts.

“Two hours doing our hyperbaric oxygen protocol and in the hyperbaric suite, and other appointments with the medical physician, with a neuropsychologist, with a therapist, with a dietitian, a physiologist.”

While HBOT therapy has not been cleared by the FDA to treat PTSD and there is debate in the medical community about its effectiveness, Dr. Elamir says he has seen firsthand the treatment help veterans.

Hyperbaric Oxygen Therapy has traditionally been used for things like helping wounds heal and treating decompression sickness from scuba diving, but a trial conducted with 35 veterans in Israel led by Aviv’s head researcher Dr.Shai Efrati found remarkable improvements in the brains of veterans with treatment-resistant PTSD. The results of the study were published in PLOS One in February.

“So that study, took these veterans, analyzed their brains, did all the testing, got them through the treatment, and we were able to change the chemistry and the physiology of the brain so that the majority of those veterans no longer met the criteria for PTSD, and they were able to help their symptoms,” Dr. Elamir said.

He says fluctuating oxygen levels in a specific protocol can stimulate the body to make new cells.

Since going through HBOT therapy Dr. Elamir says Andy’s brain function has improved by about 30%.

“When I first saw his original images on the top row, I saw a brain that had wounds, not a stroke, not Alzheimer’s, but the wounds of war led to wounds in the brain,” Dr. Elamir said, “And what I saw afterward was a healing of his wounds, improving function, and those parts of the brain that had improvements led to the improvement in symptoms.”

Andy says he’s much calmer now and his memory has improved.

HBOT therapy is expensive, and it’s not covered by insurance but for Andy who has noticed gradual improvement it was worth it.