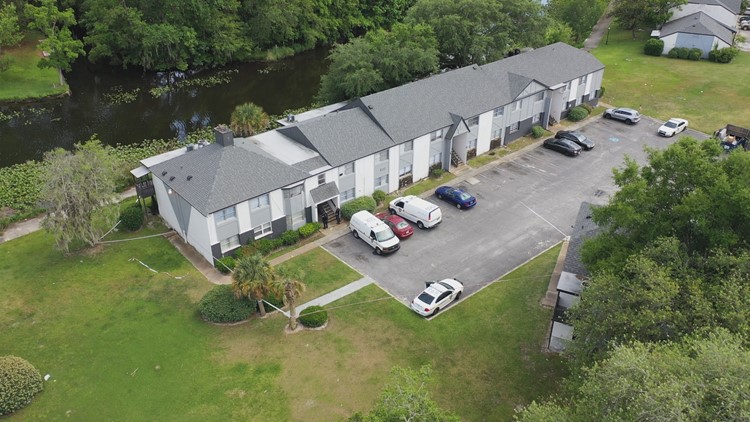 JACKSONVILLE, Fla. — The Jacksonville Sheriff’s Office is investigating a murder at an apartment complex in Jacksonville’s Westside.

Authorities said a carpet installer discovered the body of a man inside a vacant apartment. JSO believes the victim was between the ages of 20 to 30.

Police were called to the Riverbank Apartments at 10, Friday morning.

Officials said the victim died at the scene. Madison Kennedy lives near where the shooting happened. She wasn’t home when it happened, but expressed to First Coast News how she’s concerned for her safety.

“That’s really crazy and sad to see something like that happen,” Kennedy said.

According to JSO, people who live at the apartments heard gunshots Thursday night around 11. However, no one called the police. Officials said there were no signs of someone breaking in the apartment, but they believe at least one person was staying in the apartment without permission.

While the identity of the victim wasn’t revealed. One person, who asked to remain anonymous, said he heard the shots. He said the victim shot was his friend.

“I heard the shots, we were thinking someone just shooting in the back because we so used to that,” He said. “It’s a lot going through my mind. It’s not the first time I lost one of my dawgs out here.”

The resident said they were hanging out before the shooting. He shared how the victim would spend time with his brothers. As for the vacant apartment, he said it was spot where his peers would get together.

Police are asking anyone who heard the shots to contact them. The investigation is ongoing and a suspect has not been named.