Trial of Ronnie Hyde in murder of Fred Laster 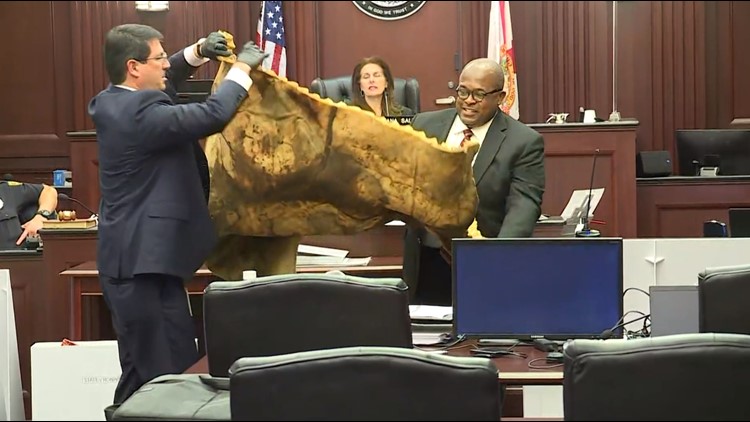 Opening statements got underway Tuesday in the long-awaited trial – five years after Hyde was charged with Laster’s murder and nearly three decades after the teen’s dismembered remains were found behind a gas station dumpster in Lake City.

Prosecutors say Hyde’s DNA found on a bloody glove in the dumpster links him to the crime, along with items similar to those in Hyde’s Jax Beach home – including non-skid bathtub stickers, knives from a knife set and a stain soaked egg crate mattress.

Mizrahi asked jurors to “hold this defendant accountable for the betrayal of the Laster family, for his aggravated child abuse upon that 16-year-old boy, for dismembering him in his bathtub and leaving behind all that evidence in that garbage dump.”

Hyde had pleaded not guilty, and his attorney Ann Finnell pushed back on the state’s narrative. “The evidence in this case is absolutely going to show you that Ron Hyde had nothing to do with the death of Fred Laster,” she told jurors.

“At the close of this case ladies and gentlemen we will be asking you to return a verdict of not guilty because there is every reason to doubt the truth of this accusation.”

Finnell painted a portrait of the Lasters as a “vagabond family” with little supervision of the six children. She called Fred Laster “a bit of a rolling stone,” and said that when he disappeared in June 1994, “they were totally unconcerned. He’d left before … they just assumed everything was OK.”

Finnell noted police found no evidence of the teen’s blood or hair in Hyde’s Jax Beach house, where prosecutors say he was killed. But she did acknowledge that Hyde had a mental illness and said and that jurors would see pictures of his home that quote “rival anything you’ve seen on the TV show Hoarders.”

The grisly crime grabbed headlines when it initially happened, and again when Hyde was arrested in 2017.

Testimony Tuesday included former deputies and crime scene detectives who processed the Dumpster where Laster’s dismembered torso was found. Prosecutors showed jurors a large stained egg crate mattress that was found in the Dumpster. Former Columbia County Sheriff’s Deputy Brian Rix testified that the condition of the torso was unlike anything he’d ever seen before. “The body was clean. It appeared to be washed … drained out.”

Hyde Attorney BeJae Shelton questioned former Columbia County Det. Calvin Fenner, attempting to punch holes in how the crime scene was processed. She showed jurors a video taken while detectives worked the scene, noting he failed to change his rubber gloves while touching different items. She also pointed out that some of the items collected, like the TriStar knives and the egg crate mattress, were very common and widely sold.

Also testifying Tuesday was William Gilbert, who reported seeing a dark Camaro-type car backed up to the dumpster shortly before his body was discovered. Hyde had a Camaro. “My wife said they found a body in that Dumpster and I said, ‘Shoot that might be the car I seen,'” Gilbert said.

Hyde is also charged with 25 counts of possessing child pornography, but those charges will be prosecuted separately, after Hyde’s defense team successfully argued they had nothing to do with the murder case.