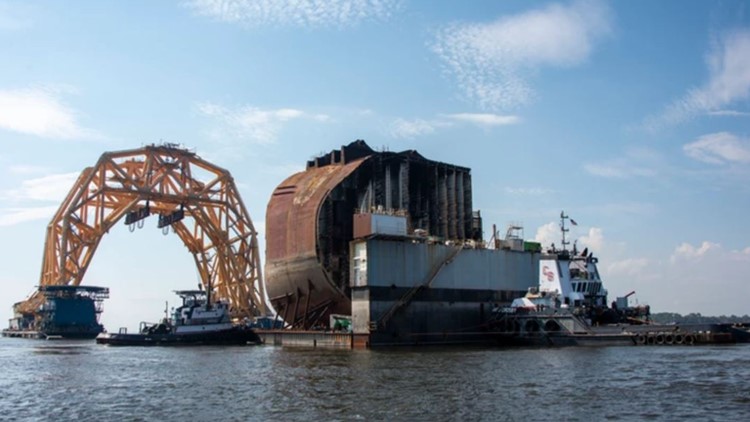 A federal lawsuit was filed last Friday by Glynn County leaders against the ship’s owner and the salvage crew.

The ship’s owner and the salvage crew were served with a seven count federal lawsuit claiming they are responsible not only for the environmental damages to St. Simons Sound, but also for monetary losses to the county’s economy.

Altamaha Riverkeeper Fletcher Sams supports the suit. He’s been documenting the environmental impacts the ship’s capsize has had on the animals and fisherman since September 2019.

“Based on the information we are collecting, we are still seeing a good amount of fuel out there,” he told First Coast News.

The lawsuit alleges the ship, which was carrying more than 4,000 cars, was loaded top-heavy, leaving it in an ‘unstable condition.’

It also describes the ‘sporadic discharges’ of oil being spotted in nearby shorelines, rivers and marshes.

Sams has been advocating for a natural resources damage assessment since the capsize, to be able to fully understand the impacts the leaks have had.

“One of the things that we would really like to know is how much fuel was left in the sound, and we still don’t have the answer to that question,” Sams said.

The county noted the salvage wasn’t without problems, claiming repeated fires caused discharges of debris and hazardous fluids. The lawsuit also alleges the capsize became a financial nuisance –  ‘the county suffered harm and injury to its properties, leases, revenue and tax base,’ according to the lawsuit.

“This is about restoring the natural resources that are a big driver of the economy in coastal Georgia,” he said.

We reached out to the ship’s owner, the salvage company, as well as the lawyers representing Glynn County, but we have not heard back.

Previous article"'The Power Of The Dog' Is A Weird Movie Title," And 95 More Thoughts I Had While Watching It
Next articleEarly release denied for Gloria Williams in Jacksonville