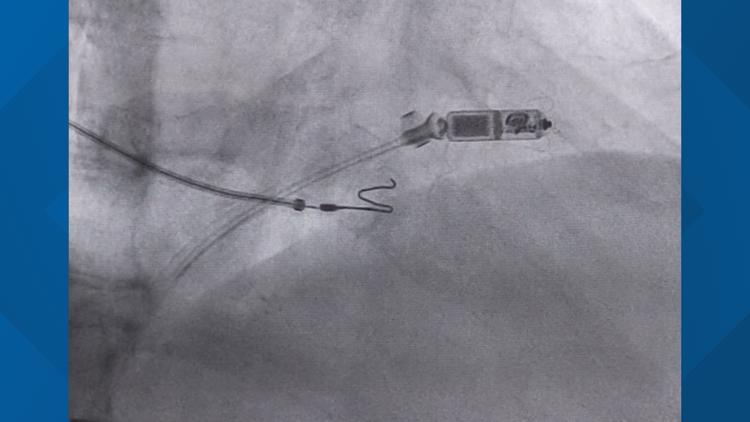 Dr. John Catanzaro of UF Health Jacksonville said the device is made for patients who require pacing in the bottom chamber of the heart.

JACKSONVILLE, Fla. — Pacemakers are getting upgraded.

An innovative procedure now allows a doctor to communicate with a pacemaker just by putting a magnet over the patient’s chest.

According to Dr. John Catanzaro, Associate Medical Director and Program Director of Clinical Cardiac Electrophysiology at UF Health Jacksonville, the Bluetooth, micro-pacemaker is made for patients who require pacing in the bottom chamber of the heart, and who are at risk of infection.

He said technology hasn’t advanced yet for the wireless pacemaker to work in both chambers. The battery life, Catanzaro said, is more than 10 years, and doesn’t require any wires.

A traditional pacemaker has a generator that acts as a battery, and has a couple of wires that get put into the heart through a vein, he said.

“Essentially, the pacemaker itself, which is a few millimeters in length, can actually get deployed and implanted in the bottom chamber of the heart and from that area, it’s able to sense the heartbeat and through advanced technology, deliver an impulse or a heartbeat when one cannot deliver one on its own,” Catanzaro said.

“Like anything, I think it’s really interesting and innovative, but like anything else, I think there’s a lot more to come and a lot further ways to pave the way to ultimately solve both the question of pacing in the atrium or the top chamber and pacing in the ventricle or the bottom chamber, so I think there’s risks and benefits of it all, but as with any technology what excites me most is what’s coming next,” he said.

Catanzaro said the procedure only takes about 15 to 20 minutes, and recovery time is about 24 hours.

Previous article13 Of The Best Movie Couples Ever, And 13 Of The Worst
Next articleThe Hunger Games Behind-The-Scenes Facts