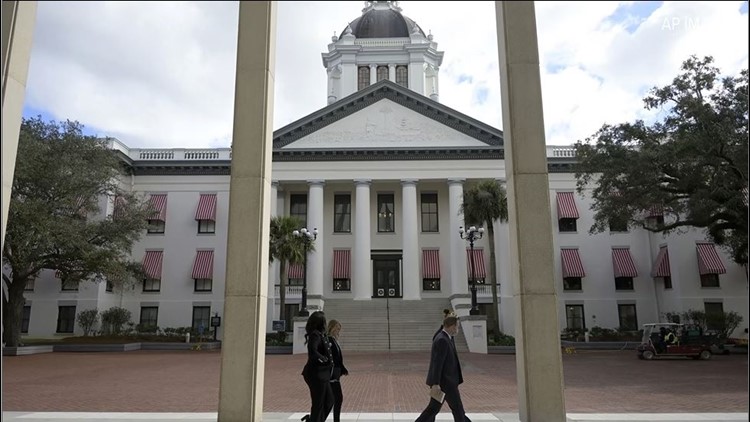 Local activists are going back to the capital in full force, and they are ready because COVID-19 kept so many of them away last year.

JACKSONVILLE, Fla — It’s the start of a new legislative session and for activists, that means heading to Tallahassee.

Local activists with Florida Rising are going back in full force, and they are ready because COVID-19 kept so many activists away from the capital last year.

“I love that big echo because it’s a great building, our capital,” said Florida Rising’s Nubian Roberts. “It’s our building. So when we shout at the top of our voices, it’s really refreshing because we know everyone in there has heard our voices for that day.”

Activists, lobbyists and advocates are looking forward to filling Tallahassee with their messages. Roberts will be travelling from Jacksonville, bringing a youth group for the first time.

“One of the top bills that I will be really advocating for is Ava’s Law,” Roberts said.

Ava was a baby who died in the Alachua County Jail after Erica Thompson gave birth alone in her cell. Ava’s Law would require every woman in custody be notified they have the right to a pregnancy test, and would allow a sentencing judge to give a pregnant woman the opportunity to defer their imposed sentence until after their delivery.

“When it’s women that are in jail for nonviolent offenses, it’s really horrible for them to be treated inhumanely and just kind of discarded,” Roberts said. “Birthing a child is painful and children are innocent. So I think that it should be fair for every woman to just have a clean, healthy birth where they feel supported.”

Roberts has her eye on a number of bills impacting women, including those dealing with abortion. She’s also watching affordable housing and voting rights legislation.

“When we’re there in Tallahassee and we’re able to talk to them individually, we’re able to really hold them accountable for what they do,” Roberts said. “It’s really important for us to be able to keep the lines of communication open so that if you’re representing us, if you’re not doing a good job, we can let you know and maybe give you a little opportunity to change it. But if you don’t, then we know what we have to do, which is vote you out.”

You know what time it is??

For activists and lobbyists that means heading from @CityofJax to #Tallahassee. I talked with @FLRising‘s Nubian Roberts about the importance of these people bringing their voices to the capital. #FlaPol pic.twitter.com/McMP3cKLsQ