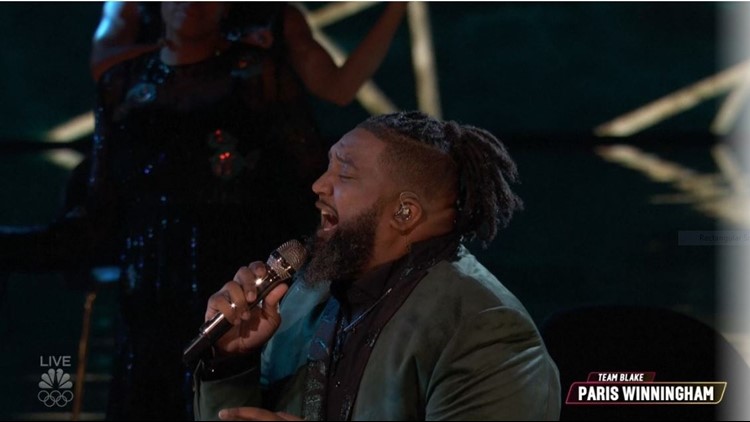 Winningham’s soulful voice kept him moving through the rounds of the singing competition with covers of beloved R&B classics like ‘I Wish It Would Rain,’ originally by the Temptations, ‘Close the Door,’ orginally by Teddy Pendergrass and his one of his final solo performance, ‘Me and Mrs. Jones,’ originally by Billy Paul.

Growing up, his family remembered Winningham developing his soulful voice in his shower.

“My water bill was high because of [Paris] singing in the shower,” his father Larry Winningham recalled. “And I used to have to knock on the wall to get him to turn the water off and get out, because he was singing so long.”

While in the service, Winningham would perform on ships and military bases. Back home in Jacksonville, his favorite place to sing is The Flying Iguana in Neptune Beach.

During the competition, Winningham originally selected John Legend to be his coach but later switched to Blake Shelton.

“It’s like a fairytale come true, but one that is so well deserved,” Brenda Frinks, Paris’ cousin and manager said. “He has so much joy about the community of Jacksonville, that it just kind of wraps me and gets other people involved.”

Paris himself attributed part of his success to his vocal coach Deborah McDuffie, who has a long history of working with legendary soul artists like Aretha Franklin, Gladys Knight, Al Green and The O’Jays, among others.

RELATED: ‘His potential is endless’ | Jacksonville’s Paris Winningham credits vocal coach for success on the ‘The Voice’

“It is such a pleasure and an honor to work with him because he’s got the talent, but that’s only the beginning,” McDuffie said. “And the attributes that take you to the top. He’s got him naturally, so I’m honored to be his vocal coach.”

Ahead of the results, Paris says he already feels accomplished.

“Regardless of what happens, regardless to, you know, taking the top or not taking the top, I’m happy. I’m content,” he said. “And I’m just grateful that God has blessed me with this opportunity.“