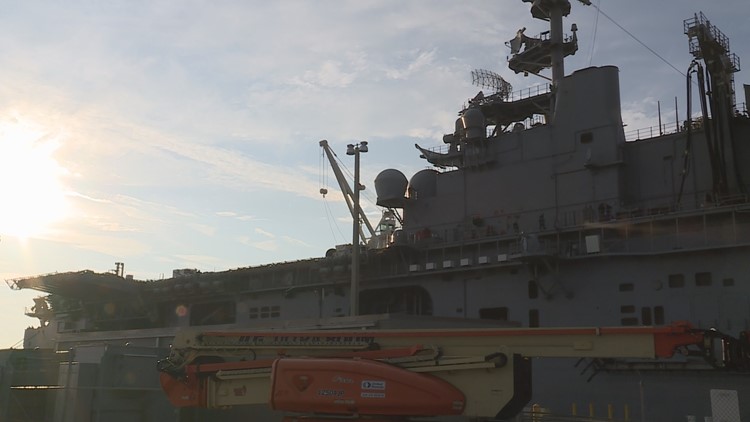 JACKSONVILLE, Fla. — For seven years, the USS Iwo Jima, a massive assault ship, was part of the First Coast community. Friday, the ship and its crews sailed off to Norfolk, Virginia. To Captain Judd Krier, the commanding officer of the ship, Jacksonville will be missed.

“From my perspective as the commanding officer here, we’ve had wonderful seven-and-a-half years in the Jacksonville area,” Krier said.

Now, it is time for new opportunities for the city. While the Iwo Jima is headed to the Old Dominion, Navy officials told First Coast News more ships will stay in Jacksonville’s naval Mayport. Lt. Commander Paul Newell, the public affairs officer, said the Navy is expected to send five destroyers to Mayport by 2024. The officer then mentioned how two more ships from Norfolk should arrive before October 1.

There are reports that show how the military can boost a city’s economy. Especially, when thousands of servicemen and women spend their money on local businesses. In this case, Newell said the impact of the Iwo Jima leaving Jacksonville is small – if not, none.

“The interchange of destroyers and Iwo Jima – a study was conducted by the Navy which found that any type of impact would be negligible,” Newell explained.

Sailors have since packed and left for Virginia. In the meantime, the First Coast keeps its arms and ports open for the military. Soon, a new wave of sailors will call Jacksonville home.