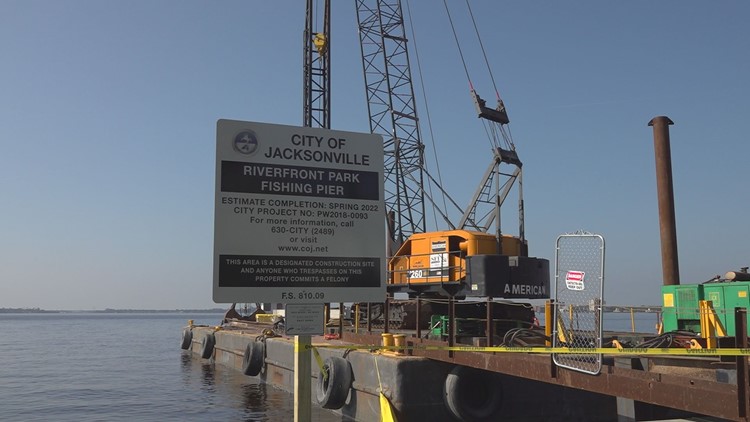 The pier will be complete in the Summer of 2022. Most local residents, anglers, and visitors agreed the pier will be a nice edition to the riverwalk.

JACKSONVILLE, Fla. — People have been taking in sunsets and fishing off the riverwalk in San Marco for years. It’s one of Jacksonville’s gems and showcases the city’s beautiful landscape.

But the peaceful oasis will soon have a new addition.

“I just kind of opened the window one morning and was like oh whoa that’s massive,” San Marco resident, Emily Jeffries said.

A barge and crane take up the middle portion of the riverwalk as construction on a new fishing pier has begun.

The City of Jacksonville sent a flyer to residents, such as Jeffries, about the project.

“I’m sure it will be nice for people who do want to come out here and fish to have a better spot to fish from,” Jeffries said.

George Smith has been fishing at the riverwalk for years. He gladly welcomed the temporary noise into his little bubble of happiness.

“I asked one of the other anglers what was going on and he said they’re building a fishing pier and I said great hopefully they’ll bring the fish with it,” Smith said with a smile.

While most residents and visitors had positive things to say, they all shared the same concern.

“Yea there really isn’t much parking here at all I guess it would be good for residents in walking distance that want to use the pier,” San Marco resident, Benjamin Hallstrom, said.

River Road, where the riverwalk is, has cars lined up and down it all day. But the congestion is worth it to those who enjoy the views the riverwalk presents.

“I live two blocks away I come down here all the time you know it will be nice to have a little more of a park,” Hallstrom said.

“The water is an escape for people it kind of makes you feel a sense of calm and relief. I think that’s why a lot of people come out,” St. Nicholas resident, Matthew Meyer, said.

Construction workers say they start at 7 a.m. and work until 5 p.m. Monday-Friday. They did add weekend work is possible in the future.