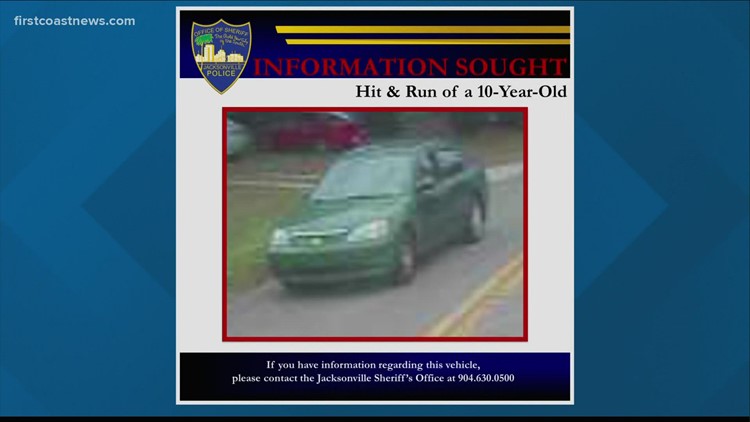 Police say a dark green car failed to stop and hit the two victims at the bus stop.

JACKSONVILLE, Fla. — A mother and a child are in the hospital after being hit while crossing the street near a bus stop Wednesday afternoon.

Police are asking for the community’s help in identifying a suspect and vehicle that could be connected to the hit-and-run crash.

“There’s a school bus sitting there with the lights flashing. I had no idea what was going on but it was definitely intimidating to see that many lights flashing,” said Jeremy Church, a neighbor who lives near the crash location.

Around 3 p.m. on Wednesday police say a marked and lighted school bus was dropping children off in the 2000 block of Hyde Park Road.

And around that time, an adult and a 10-year-old child were crossing the street in front of the bus and were struck by a vehicle.

“I just can’t believe anybody would try to pass a school bus with its lights on,” said Church.

Church has lived in the neighborhood for decades and he’s still at a loss for words.

“20 years ago it could’ve been my kids. That was their bus stop too. The bus stop hasn’t moved as long as I know of,” said Church.

Police say a dark green car failed to stop and hit the two victims at the bus stop. The mother and child were sent to the hospital for their injuries. Police say the child suffered more life-threatening injuries of the two.

“I’m not surprised that somebody got hit down there because when people drive around the corner, they just are driving too fast for the conditions of the road,” said Richard Carroll.

Carroll says their neighborhood needs speed bumps or else more accidents will happen.

“What can I say people just don’t like to obey the law and drive the speed limit,” said Carroll.

A family member of the two victims made a GoFundMe to help out with their medical expenses and if you would like to donate you can click here.