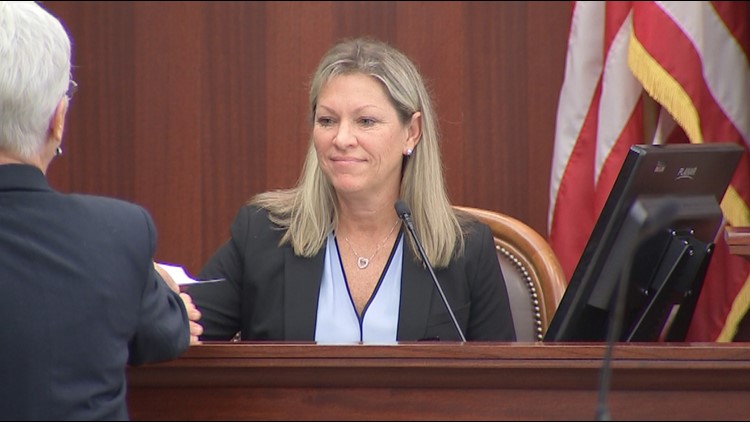 ‘Autopsy’ one of Kessler’s phone searches, detective testifies, along with “Joleen Cummings I have vanished.”

A little over an hour later, the defense rested, too — after calling just one witness.

Kessler is accused of killing Joleen Cummings, a 34-year-old hairstylist and mother of three who vanished in May 2018 and is presumed dead.

The case is expected to go to the jury Thursday, following closing arguments.

Without a body or a known murder weapon, prosecutors built their case on circumstantial evidence, including Cummings’ blood found throughout the Yulee hair salon where both women worked, as well as on Kessler’s combat boots, clothes and hair cutting shears.

The defense presented only a few items of evidence, including a baggie — possibly of drugs — found at the salon, along with texts showing Kessler was upset about that discovery.

One of the final state witnesses, Nassau County Sheriff’s Office Detective Charity Rose, testified about what she found when reviewing Kessler’s iPhone searches around the time of Cummings’ disappearance.

“What was her first search?” Prosecutor Donna Thurson asked.

“And did she conduct a Bing search?”  Thurson asked.

After the state rested its case, Kessler’s defense team asked the judge to acquit their client, arguing there isn’t a body to prove a murder. But Circuit Judge James Daniel denied that request, saying the jury should be allowed to consider Cummings’ presumed death in the context of her life.

“It was Mother’s Day, [her] birthday, she had plans to be with her children, children are very important in her life,” he said, explaining his decision. “[There is] no evidence that somehow there were issues that would cause her to somehow disappear.”

Kessler was again not in the courtroom, due to her disruptive behavior, although the judge brought her in three times to ask if she wanted to participate.

Closing arguments are set to begin at 8:30 Thursday morning and will be live streamed on the First Coast News app.