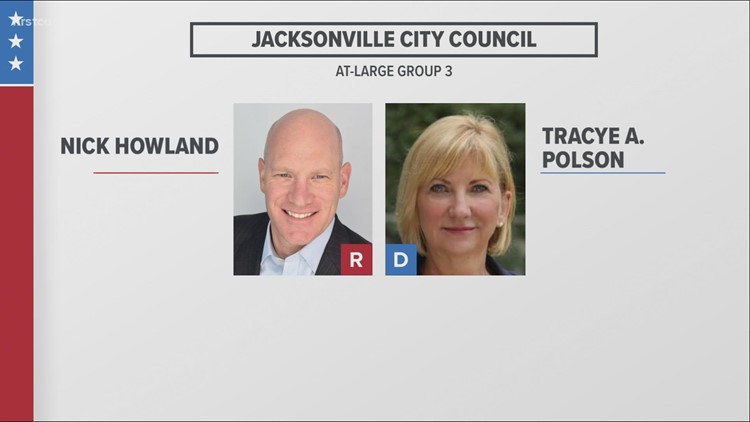 After all the ballots were counted, Republican Nick Howland and Democrat Tracye Polson were separated by a little more than 600 votes.

DUVAL COUNTY, Fla. — It was an extremely close race Tuesday for the open Jacksonville City Council seat, which pushed the special election into February for a runoff.

Republican Nick Howland received about 36% of the vote, Democrat Tracye Polson topped him by less than 1%.

The close race means February will be unpredictable.

First Coast News followed up with each candidate to see how they’re feeling after Tuesday, and what the next two months of campaigning will look like before voters go back to cast their ballots once again.

Polson says she’s happy to have been the top vote-getter Tuesday and will continue having conversations with people around Jacksonville ahead of the runoff.

“We’ve been holding town halls, we’ve been sending out mail and knocking on doors and having conversations with people – letting them know about who I am,” Polson explained. “That I’m a mental health professional, that I’m a mom of five adult children, that I love Jacksonville. And I want to push back against the lack of transparency that we’ve seen in city council.“

Howland says the surge of republican voters who came out to precincts Tuesday gives him momentum going into the runoff.

“The platform that I’ve laid down, and my team has laid down, appeals not only to the Republican party, but also to Democrats and NPAs. And republicans, we all want safer streets and communities,” Howland explained. “We all want to create more jobs, particularly middle class jobs around manufacturing and logistics. And we all want a strategic plan for our city, a plan that will survive the changeovers in mayoral administrations and city councils.”

This special election was especially difficult due to the rushed timetable and shorter campaign time for candidates. https://t.co/sPmiq7woox