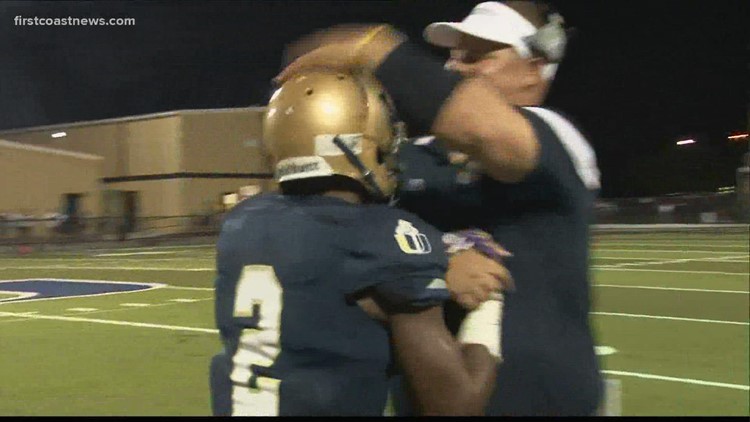 “He came over my house and helped me move a couple of times. He was always at workouts never missed. He would stay late, you had to push him out of the locker room.”

JACKSONVILLE, Fla. — Otis Anderson Jr. was a terrific football player, but everyone we talked to said he was an even better man.

That is what made his sudden death at only 23 years old so tragic for those who knew him.

University Christian head football coach David Penland told First Coast News he found out Anderson Jr. had been shot to death Monday night after one of his former player’s parents called him to tell him the news.

Now, he is struggling to come to terms with the fact that his former player is dead.

“I was incomplete shock at first,” Penland said. “It’s hard to process something like that especially with a kid you loved so much.  I didn’t sleep much last night and I’m trying to get through the day to day.”

During his four years at University Christian School, Anderson Jr. helped lead the Fightin’ Christians to back-to-back state titles in 2015 and 2016. As an undersized running back, many doubted whether Anderson Jr. could have success on the collegiate level.

He proved his doubters wrong putting together a fine career at the University of Central Florida. Anderson had a short stint in the NFL. Most recently he was a member of the Los Angeles Rams practice squad before being cut.

Penland says he will remember Anderson Jr. as the guy who would do anything for his team to help them win on and off the field. Penland added, Anderson Jr. was a guy you could call at the last minute and he’d come help you.

“All around good kid, would do anything for you on and off the field,” Penland recalled. “He came over my house and helped me move a couple of times. He was always at workouts never missed. He would stay late, you had to push him out of the locker room. A kid that loved football. Loved his teammates and loved his coaches.”

He was a phenomenal teammate, who was loved by everybody.