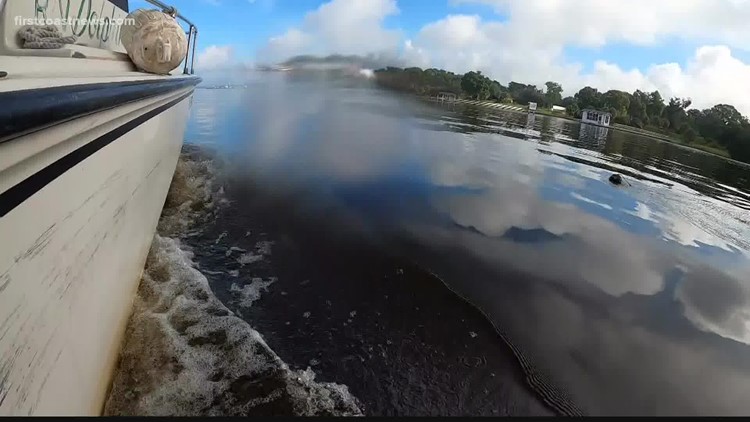 JACKSONVILLE, Fla. — When you drive almost anywhere on the First Coast, you’re likely going to cross a bridge or drive near water. As more people move into the area, what’s that doing to our waterways?

As we continue our series called ‘Growing Pains’ where we look at how population growth impacts different parts of our lives, we look at what’s happening to our waterways.

And just as there is more of “us” here, the water is showing it.

She was concerned about less state funding to test water quality, so she started testing the water routinely on parts of the St. Johns River.

“Even though we see these beautiful homes worth lots of money, it’s quite polluted in fact,” she said as she looked out from a boat at waterfront properties. “We’ve been monitoring the chlorophyll levels every month for the last four years, and they’ve always been elevated.”

“There’s too much algae in the water,” Simmons says. “Too many nutrients.”

“It’s a problem,” Edie Widder said. She’s a deep sea biologist. She was concerned about pollution in the oceans coming from inland waterways. So she started ORCA, an organization to monitor pollution levels in the Indian River Lagoon in Central Florida.

“We create these maps that look like weather maps,” she said.  Based on water testing, the colors on the maps indicate higher levels of pollution in the waterways.  “And in our case, red is more toxic, and blue is less toxic,” she explained. “And the difference was just so striking, so enormously striking.”

These maps often show that closer to neighborhoods and businesses, the nearby waters were more polluted.

The plants along the shorelines will filter the pollution from the runoff before it gets into the rivers.

“It’s even places where you might think there’d be high levels of pollution because it’s, for example, a golf course, but it was lined with mangroves and that made all the difference,” Widder said.

“But all too frequently, more people moving into Florida has turned its waterways ‘into an algae dominated system. So it’s happened pretty rapidly,” Widder said.

“Wetlands are natural filters, and so that’s very alarming.”

The river report also states the ingredients needed to make blue-green algae are abundant in the old river.

“When you add them in abundance,” Widder said, “then boom!”

So how does this affect you?

So recreational fishing and swimming is not recommended when there are blooms, and they seem to happening almost every year now.

So the seafood economy is jeopardized too.

And then the sheer beauty of the area is something to consider too…especially because it’s why so many people move here to begin with.

RELATED: Riverkeeper: Toxin levels from algae on the St. Johns River are high

RELATED: FWC: Unprecedented level of more than 1,000 manatee deaths documented in Florida for 2021