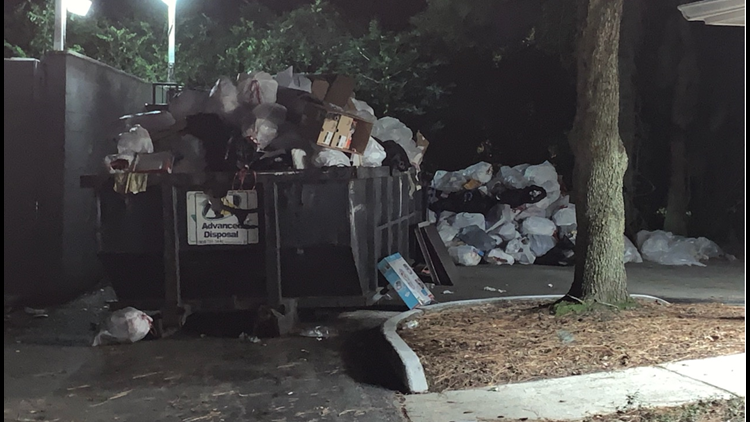 According to St. Johns County figures, in five years, the number of households paying for garbage pickup climbed by 20,000.

ST. JOHNS COUNTY, Fla. — Trash has been big news on the First Coast because it’s not getting picked up on a regular basis in some places.

However, there is another issue buried in the trash: As the population grows, garbage mountains grow.

It is a growing pain that often goes unnoticed.

Larry Coleman of St. Johns is like many of us when it comes to what we know about garbage.

“I put it out,” Coleman said pointing at the curb. “Sometime the next day on trash day, it’s gone. And I take the cans back to the garage.”

Trash seems to do a disappearing act, but it’s accumulating out of sight.

Greg Caldwell is the St. Johns Public Works Director. He said the number of people added to the county’s trash pick-up list is getting bigger.

“Every day we are increasing that because every day there is a new house that receives a certificate of occupancy,” Caldwell said.

According to St. Johns County figures, in five years, the number of households paying for garbage pickup climbed by 20,000.

Trash in St. johns County used to go to a 300-acre landfill in the southern part of the county until about 20 years ago. The county topped it with some soil and started taking trash out of state.

Before it goes out of state, it’s taken to a transfer station.

“At those places, it’s put on the floor and put into trucks,” Caldwell explained. “Then it’s taken up I-95 to the state of Georgia.”

It eventually ends up at the Chesser Island Road Landfill in Folkston, Georgia.

Caldwell said officialts made the decision to take the trash out of state 20 years ago.

“I would imagine money, environmental impacts and the way the county was headed,” Caldwell explained as the possible reasons for the decision.

In the past year, St. Johns County collected 6,000 more tons of trash from homes.

However, the landfill may soon run out of space.

That space is slowly getting smaller as folks like Coleman, who has children, put more trash on the curb and as more people call Northeast Florida home.