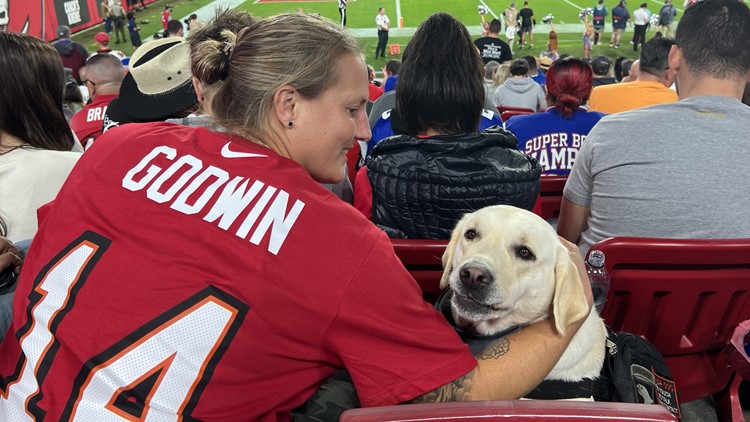 Chris Godwin, his wife and their foundation partnered with the organization, headquarted in Ponte Vedra, to sponsor service dogs for the Army veterans.

TAMPA, Fla. — As wide receiver Chris Godwin put points on the board for the Tampa Bay Buccaneers during its Monday Night Football match-up against the New York Giants, Army veterans Rebecca Stephens and Carlos Cruz were with their canine companions cheering in the stands.

A moment – and life – possible because of Godwin’s family and an organization based on the First Coast.

“Chris Godwin reached out to us and wanted to be part of the K9s for Warriors family, we were absolutely excited,” Rory Diamond, the CEO for K9 for Warriors, said. “And it was really great for our warriors to know that what they’re struggling through is recognized by somebody so famous.“

Stephens and Cruz were invited to the game by the Team Godwin Foundation and recipients of service dogs from K9s for Warriors. It is nonprofit headquarted in Ponte Vedra that rescues dogs from high-kill shelters all across the southeast, trains them and pairs them with veterans in need of mental, physical and emotional support.

Godwin, his wife and their foundation partnered with the organization to sponsor service dogs for the Army veterans.

Stephens and Cruz went through the program two years ago with their canine companions, Diamond says. Monday night was the first NFL game for both pairs.

The nonprofit was also recognized at the match-up.

“We’re just getting the word out here in Tampa,” Diamond explained. “To see all the fans and the New York fans all getting to hear about K9s for Warriors, what more could you ask for?”

If this picture alone doesn’t make you want to watch @FCN2go at 11 to find out more, I don’t know what else will. pic.twitter.com/A24MEYyypV