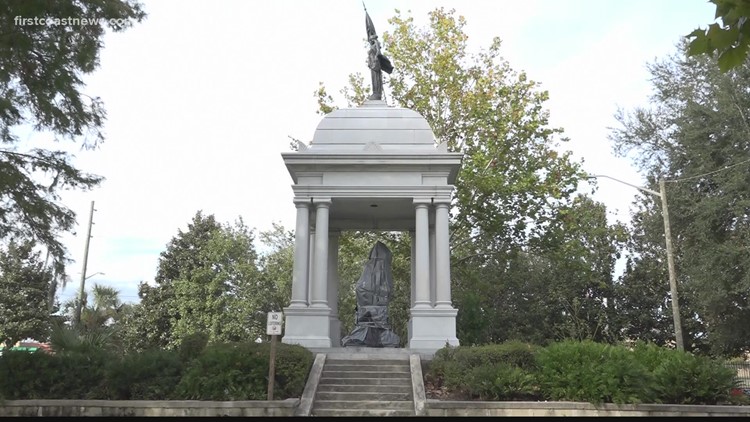 The plan so far consists of a facilitated community conversation to develop a roadmap and funding plan for removal, relocation and renaming on city property.

JACKSONVILLE, Fla. — The legislation was withdrawn last week for moving the confederate monument from Springfield Park, and Thursday City Councilman Aaron Bowman came up with a comprehensive plan to fix the issue.

“It’s time for us to make hard decisions and be the leader we were elected to do and resolve them. Is everybody going to be happy with the issue or where it ends up no,” said City Councilman Aaron Bowman, District 3.

The plan so far consists of a facilitated community conversation to develop a roadmap and funding plan for removal, relocation, and renaming on city property.

“I’d say right now that the amount of money that we need to get this accomplish depends on what the plan is,” said Bowman.

Bowman says the good news is that the city council owns every single dollar of their taxpayer’s money and that the budget will come out next July and they will vote on it next September.

“That timeline is already moving so I think the discussion needs to start happening now of how do we facilitate this,” said Bowman.

President of the Northside Coalition, Ben Frazier, believes that the city put the removal of confederate monuments on the back burner and it’s time to get back to work.

“We need to have a process in place to come up with a viable common-sense solution that’s the issue we are dealing with right now,” said Frazier.

The Northside Coalition is now proposing a series of special meetings be convened that they call Charrettes.

Frazier says these facilitated meetings will allow all parties an opportunity to discuss and resolve differences.

Bowman’s comprehensive plan should be completed by July 2022.