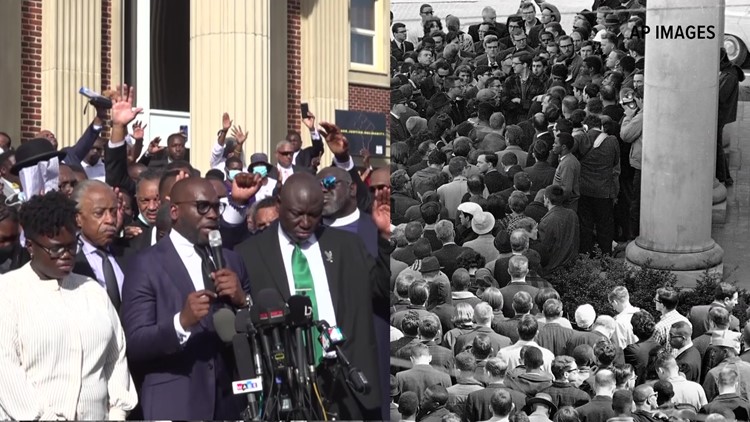 Reverend Jesse Jackson invited Black ministers from across the country to join him in Brunswick Thursday for a ‘Wall of Prayer’ and “Justice for Ahmaud’ march.

JACKSONVILLE, Fla. — The images that came out of Brunswick Thursday were a reflection of the past.

During the civil rights movement, mass marches were held to demonstrate the desire of Black Americans to exercise their constitutional right to vote.

A local history professor tells the On Your Side team there are direct connections to the era and what happened during the gatherings amid the trial over Ahmaud Arbery’s death.

In 1965, Rev. Martin Luther King Jr. called on all ministers, regardless of faith or race, to come with him to finish the march from Selma to the Alabama capitol in Montgomery.

Alongside him during the 54-mile trip protesting Jim Crow Laws was Rev. Jesse Jackson.

“So, the fact that Rev. Jackson, who was also with Dr. King when he was assassinated in Memphis in ’68, called on ministers to come to Glynn County and support the concept of justice was a direct connection to the civil rights struggles of the past,” Michael Butler, Kenan Professor of History at Flagler College said.

And, the images almost 60 years later – not much different.

He even asked the judge to prohibit the reverend from attending court with the family and to monitor and track those who do come into the courtroom. Gough said he made the motion because he thinks high-profile Black pastors could influence the jury.

In response, Jackson invited Black ministers from across the country to join him in Brunswick for a ‘Wall of Prayer’ and ‘Justice for Ahmaud’ march.

Professor Butler says the mass march strategy is also one that stems from the 1960s.

“It’s meant to justify social change, and to help focus attention on the injustices that exist,” he explained. “Removing people from a court of law because of who they are, or what their color is, or what their occupation is, is fundamentally un-American. And the call for ministers from across America to come and expose that injustice is a classic civil rights tactic.”