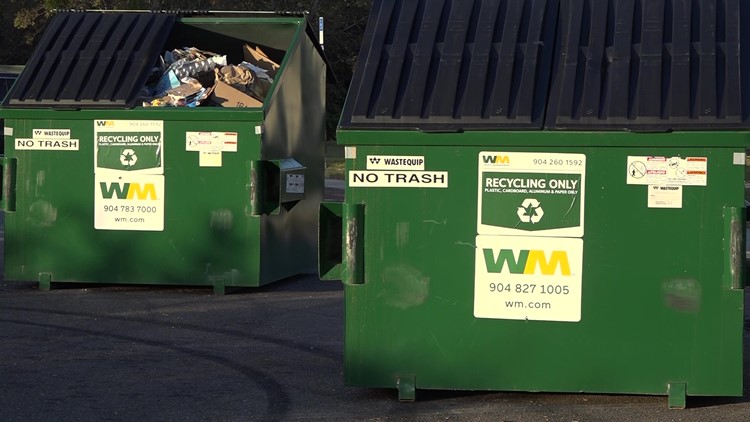 “We have seen a marked improvement, but we are still evaluating the situation to determine when we can return to regular recycling,” Mayor Curry said in a statement.

JACKSONVILLE, Fla. — It’s been about a month and a half since the City of Jacksonville suspended recycle pick-up service.

Since then, those wanting to separate their waste have to drop off recyclables at 14 different sites around the city.

The On Your Side team found out that it might not change anytime soon.

Esther Pena and her husband have been using the Sheffield Park drop-off location near their Northside home.

“Because I feel guilty to put the garbage and the recycle at the same time. I think that’s not fair,” homeowner Pena said.

When the recycle pick-up first stopped, it was so the city and its contracted haulers could catch up on yard waste pick-up.

When the On Your Side team first spoke to Northside homeowner Susan Russell back in September, she said her yard waste had been sitting on the curb for about six weeks.

RELATED: City of Jacksonville looking to use $4M in federal funding to help with yard waste collection

She’s been pleased with the new contractor that’s hauling for parts of North and Northwest Jacksonville, Meridian Services. Russell says besides one missed pick-up of her yard waste last week, the hauler has been coming by every week.

“Whatever people put out, they picked it up,” Russell explained. “Except for the recycle, which is still not resolved.”

Mayor Lenny Curry’s office sent the On Your Side team the following statement:

“We have seen a marked improvement, but we are still evaluating the situation to determine when we can return to regular recycling.”

The city councilmember representing Pena and Russell’s district, Al Ferraro, says the change has been an improvement, but hopes the city doesn’t have to rely on the green bins for long.

“People are really tired of it being out here in the park. They really want them in an industrial/commercial area if it’s going to be picked up this way,” Ferraro said. “Getting it back to being picked up at the homes is ultimately the goal we’d like to see.”

Pena says she’ll continue using the drop-off location at the park, but doesn’t want to get billed for a service she isn’t receiving.

“I am the taxpayer. If you aren’t going to pick up the recycle, give me back my money then,” she explained.

Coming up on @FCN2go at 11, the mixed feelings homeowners have about the recycle changes. pic.twitter.com/azcRmVkJ7x