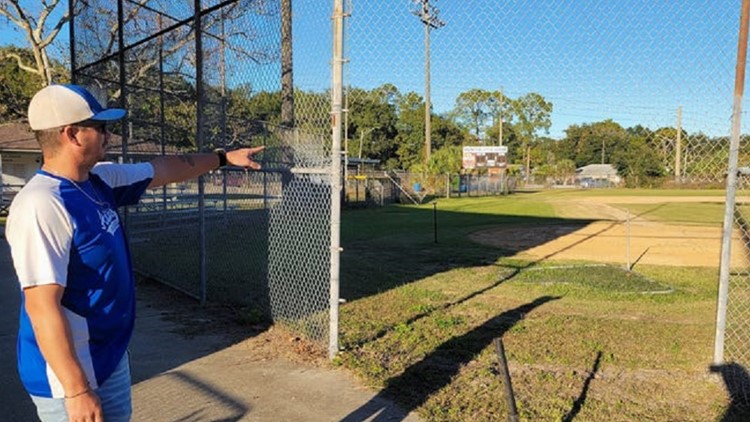 “It’s sickening,” Jason Rolston said. “There are people who do stuff out there who shouldn’t do it. I can’t judge them. But they took away from the kids.”

JACKSONVILLE, Fla. — Editor’s Note: The video above is from a previous, unrelated story dated Nov. 12, 2021.

Jason Rolston stands next to the huge hole cut in a ballfield fence, staring at the ripped-out wiring on light poles nearby and the scattered remains of the Arlington Little League‘s equipment.

A few baseball bats, some knee pads and a broken snow cone machine lie behind its fieldhouse next to a ripped-off ladies’ room door, all that’s left of a massive theft where upwards of 1,000 kids play baseball and softball.

“Every mess you see here is their mess,” Rolston, the league’s vice president, said of the thieves as he surveyed the damage he discovered last weekend.

“It’s sickening,” he said. “There are people who do stuff out there who shouldn’t do it. I can’t judge them. But they took away from the kids.”

First, they cut open a locked gate on Fort Caroline Road a few blocks east of Cesery Boulevard. Then after driving over a field, they cut the fence and drove into the fieldhouse area, Rolston said. They pounded away at doors and locks as they claimed all they could, he said.

“They did whatever they wanted to do,” Rolston said. “They stole every piece of copper we had from every light pole except the ones on the road. They broke into our utility trailer on the side of the bathroom, put garbage cans up so no one could see them and broke that metal door open.”

Damage to the four ballfields, lights and facility as well as the theft of equipment means Arlington Little League can’t go on with any games, said Jim Knight, league president. That’s especially troubling for hundreds of disabled Challenger League players, who use some of the more specialized equipment.

“I am shocked, absolutely shocked,” Knight said. “… Over 25 percent of our population are Challenger players. We do not charge them for anything. We take care of them. Of course, now we are broke, so we have a major problem.”

A GoFundMe page has been set up at bit.ly/3x03gRe to replace the wiring, tools, baseball equipment and make repairs. But the $75,000 goal is now apparently a lowball estimate based on a closer look at the damage and what can be repaired, Rolston said.

“t’s unsafe for anyone to be out here, minus us and people to repair it,” he said. “It’s not dead. It’s just not breathing well right now. It will be. It’s going to come back.”

“It’s the Grinch who stole baseball from these kids,” added longtime board member Horace Strickland. “They are defenseless. The kids just lose everything.”

A fixture in the Arlington community

The volunteer-run league has been an Arlington fixture since 1963 and hosts 10 divisions for baseball and softball players ages 3 to 16, as well as the Challenger League for physically disabled children. With fall ball done, they were prepping some of the fields, including two for Challenger teams, when the previous weekend’s thefts occurred.

The league had some earlier break-ins, one in October seeing its main transformer broken into and damaged, the cut lock still sitting on top of it. The JEA had to shut power to the entire complex, so someone then stole the main power cable that ran from the transformer to the fieldhouse.

Last weekend’s thefts cleared out the rest of the wiring, including an attempt to use a vehicle to rip a cable from behind a dugout that failed. The cable’s frayed end sticks out of the ground like a tangled tree root.

The rest of the damage is evident elsewhere.

The concession stand was broken into, with multiple tools, fielding equipment and baseballs taken. About 100 pairs of cleats donated by Nike for players who cannot afford their own were stolen from an upstairs storeroom. And a storage trailer was ransacked, with multiple weed eaters, a generator and two welding machines taken.

“We had batting machines taken; I mean, just everything,” Rolston said. “They took probably 10 dozen baseballs; they are $70 to $80 for a box. Everything goes to the kids. If they don’t have it, we bring them cleats. We supply them if we can.”

“We want help to get the park up and running, get everything back on its feet,” Knight said, thanking the Lions Club for recent help. “We would like to get some participation from the community. This is a community park, one of the few independent parks.”

You can read more about this story from our partners at the Florida Times-Union.