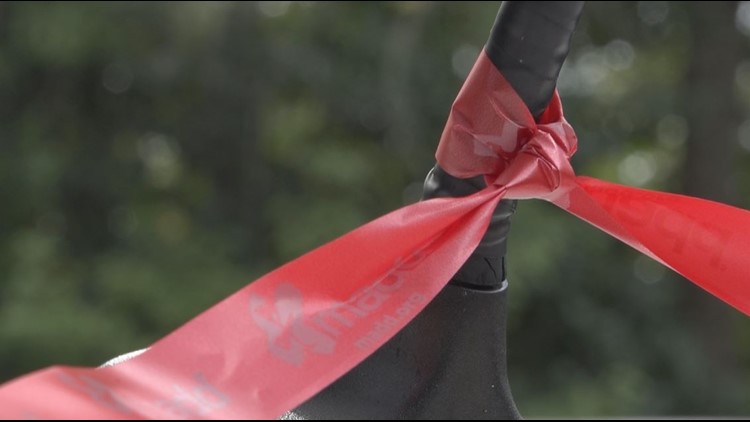 The goal is to promote designated drivers during the holiday season.

JACKSONVILLE, Fla. — Mothers Against Drunk Driving is celebrating its 35th annual “Tie One On For Safety” Campaign. From November to December MADD encourages drivers to tie a red ribbon on their vehicle or use a red magnet to remind people who are drinking to always have a designated driver.

“MADD is not against alcohol. We have nothing against drinking as long as someone is over the age of 21 and they’re legal to drink,” MADD Program Specialist Jody Cotton said. “There’s nothing wrong with having a drink occasionally, just not if you’re going to drive. We talk about the plan, the Uber, the Lyft, whatever option you have. But the best thing is if you’re going to drink, don’t drive, plain and simple.”

Cotton says in 2019, from Thanksgiving Eve to New Year’s Eve, more than 1,000 people were killed by drunk drivers. She says drinking and driving increase around the holidays.

“So many people are on the road, so it’s actually very deadly,” Cotton said. “You also have people who sometimes don’t drink with dinner, or they don’t drink outside of their home, but sometimes they’ll have a glass of wine or several, whatever their treat is on Thanksgiving, and not realize how impaired they are and then they get out on the roads.”

Davika Puls, a Jacksonville mother, says she knows all too well the results of getting behind the wheel drunk.

“My story begins on October 21, 2018,” Puls said. “Nathan had gone out to deliver a pizza, and at 8:15 I got a call from his manager, and she was frantic and upset and very difficult to understand. She said Nathan has been in a car accident.”

Puls’ son Nathan was hit by a 20-year-old drunk driver.

“They told us that Nathan did not survive the car accident. Him laying on a gurney with tubes coming out and being gone is something that I will never forget,” Puls said. “There were no skid marks. He did not hit his brakes. Nathan was basically squashed between two cars.”

Puls says she works with MADD to share Nathan’s story so another family doesn’t go through what they’ve gone through.

“I feel like this is how he lives on, letting people know his story, that he was a person. He did live. He was a good person, and his death was 100% avoidable,” Puls said.

“Whether you’re the victim or the offender, families are torn apart, and it’s all so preventable. So preventable, every single DUI, whether it’s that misdemeanor or that felony, it’s so preventable,” Cotton said.