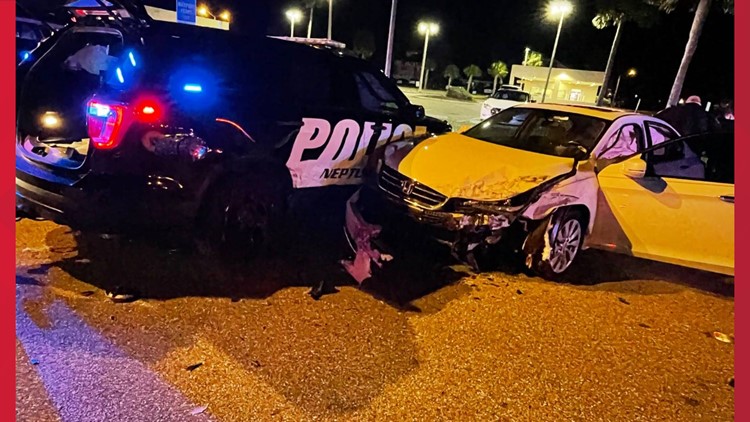 Frank Stevenson refused to participate in a field sobriety test and was issued a DUI citation and a citation for careless driving.

NEPTUNE BEACH, Fla. — A man was arrested for DUI after he crashed into a parked Neptune Beach Police Department patrol vehicle earlier this week.2

Police say all northbound lanes were closed as they worked the crash. While police were investigating, an impaired driver hit an officer’s vehicle.

The crash involved a white Honda Accord and a Ford Explorer patrol vehicle. Both vehicles sustained major damage.

Police say the patrol vehicle was blocking traffic with its emergency lights activated when it was hit by the Honda.

The driver was later identified as 51-year-old Frank Stevenson. When officers were speaking with him after the crash they noticed his eyes were red and watery, according to the arrest report. They also noted that they could smell alcohol on his breath.

Stevenson’s speech was reportedly slurred and he appeared to be off-balanced and unsteady on his feet when asked to walk with investigators, the report says.

He refused to participate in a field sobriety test and was issued a DUI citation and a citation for careless driving.

Fortunately, no injuries were reported during the incident.

Early Sunday morning, 11/12/21, Officers were on the scene of a separate vehicle…