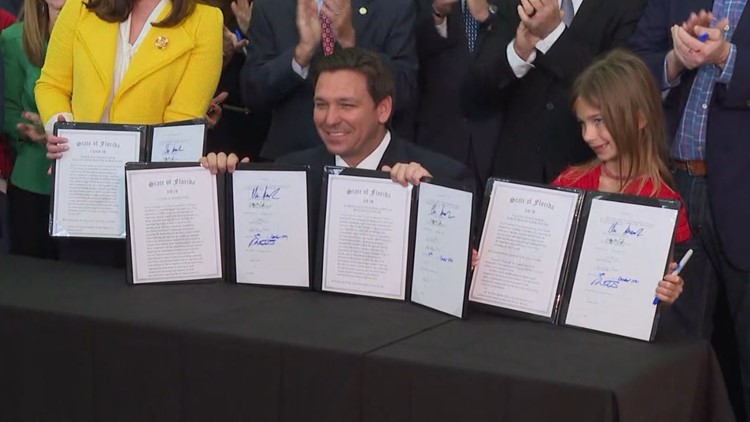 BRANDON, Fla. — With the flick of Gov. Ron DeSantis’ pen Thursday, Florida has several new laws on its books.

The governor wasted no time signing four bills from the Florida Legislature’s special session after they arrived on his desk Wednesday night.

Members of the state’s House and Senate spent days mulling over the bills which address state-wide changes ranging from limiting COVID-19 vaccine mandate requirements to taking steps for Florida to exit OSHA.

Here’s a breakdown of what to expect from the new laws:

Under the law, local governments and schools, as well businesses, would be barred from enforcing COVID-19 vaccine mandates. Employers could, however, work around the ban if they allow employees to apply for medical or religious exemptions.

The other opt-out option private businesses have at their disposal to circumnavigate the ban would be if an employee had a previous COVID-19 infection or if they agreed to regular testing and wearing protective equipment.

The Florida Department of Health would be tasked with creating an exemption form that employees would have to fill out.

The new law will remain in place until June 2023.

Under the law, Florida can now create its own plan for occupational safety for all employees. Part of that process includes giving the governor’s office $1 million to propose its own version of OSHA. However, the state would not be fully free from OSHA’s oversight.

And while DeSantis signed the bill into law, Florida’s new rules still need to be approved and meet the standard OSHA guidelines. From there, lawmakers say Florida can be more stringent in its guidance. But, that doesn’t necessarily mean Florida will be exempt from federal vaccine mandates.

The whole process of creating a plan, acquiring funding and receiving federal approval could take anywhere from two to five years.

According to OSHA, 28 states have their own OSHA-approved plans — 22 of which cover both private sector and state and local government workers. The last time OSHA certified a state’s new rules was in Connecticut in 1986.

Under the law, Florida’s surgeon general would not be allowed to mandate any vaccines during a public health emergency.

The original rule was passed in 2002 when lawmakers granted the state surgeon general the ability to exercise emergency powers, which included vaccine mandates, “by any means necessary.” Lawmakers say the measure was approved following security concerns after the Sept. 11 terrorist attacks.

Despite stripping the surgeon general’s ability to mandate vaccines, the legislation keeps every other emergency power untouched. The surgeon general can still forcefully quarantine, test and treat anyone during a public health emergency.

Blocking information on medical and religious exemptions (HB 3B)

Under the law, information regarding medical and religious exemptions is blocked from any investigation done by a business.