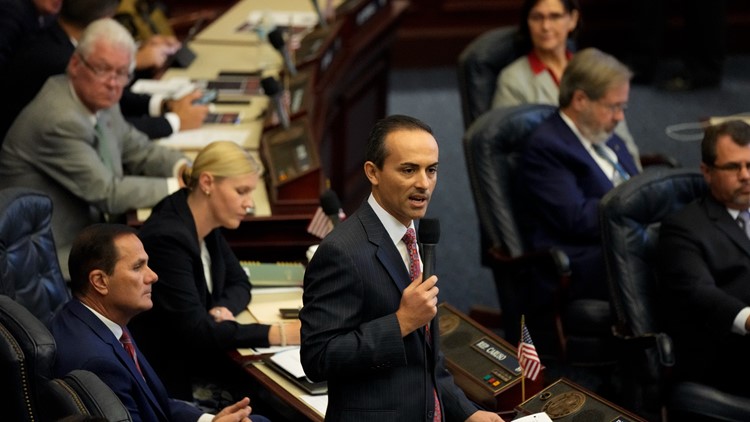 The bills will be sent to the Senate for final approval.

TALLAHASSEE, Fla. — After two days of debate during Florida’s special legislative session, House members have approved a handful of bills that would limit vaccine mandates within the state.

One of those bills (HB 1B) would bar local governments and schools, as well businesses, from enforcing vaccine mandates. Employers could, however, work around the ban if they allow employees to apply for medical or religious exemptions.

The other opt-out option private businesses have at their disposal to circumnavigate the ban would be if an employee had a previous COVID-19 infection or if they agreed to regular testing and wearing protective equipment.

Democratic House members criticized the bill for being too vague, reducing a business’s ability to protect its workers and leaving them vulnerable.

Another bill (HB 7B) that made its way out of the House strips some of the emergency powers awarded to the state surgeon general. The measure would not allow the surgeon general to mandate any vaccines during a public health emergency.

Critics felt the bill could contribute to misinformation, passing legislation that implies that vaccines are bad. However, those in support of the measure felt it created more personal freedoms for people.

The original rule was passed in 2002 when lawmakers granted the state surgeon general to exercise emergency powers, which included vaccine mandates, “by any means necessary.” Lawmakers say the measure was approved following security concerns after the Sept. 11 terrorist attacks. There were also concerns of a bioterrorist attack – during that period of time letters laced with anthrax were sent across the country, resulting in five deaths.

Despite stripping the surgeon general’s ability to mandate vaccines, the legislation keeps every other emergency power untouched. The surgeon general can still forcefully quarantine, test and treat anyone during a public health emergency.

One final bill (HB 3B) that also was approved blocks information on medical and religious exemptions from any investigation done by a business.

The House-approved bills are now on their way to the Senate for final approval.

Florida Gov. Ron DeSantis called for this week’s special session as part of his fight against federal vaccine mandates.

DeSantis has become one of the highest-profile Republican governors in the country through his vocal opposition to lockdowns and virus-related mandates, pitting himself against President Joe Biden. Democrats have denounced the special session as political theater meant to raise DeSantis’ standing within the GOP.