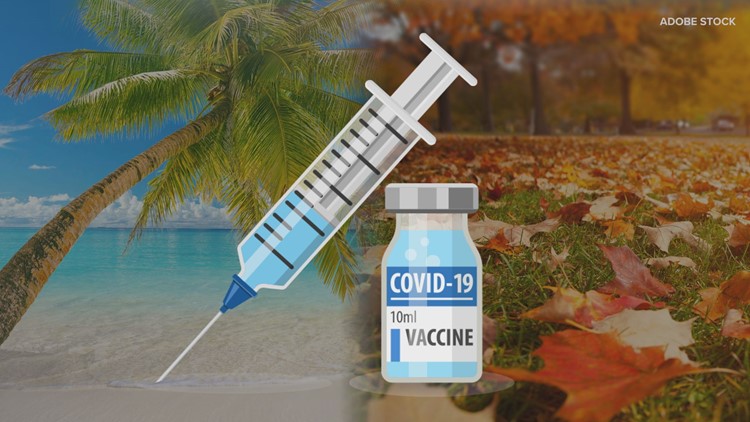 Scientists say a combination of colder weather and low vaccination rates in parts of the state are driving the recent flare-up.

ST. PETERSBURG, Fla. — Scientists have questioned the “seasonality” of COVID-19 since early on in the pandemic after the virus showed possible signs across the country.

“It could cause other coronaviruses have been shown to have the seasonality,” Dr. Edwin Michael with USF Health said.

The mathematical modeler has been tracking the surges of the virus for the last year. He says the way the virus spreads plays a role in the increase of cases.

“We need to go back to first principles, for example, the flu virus and any other respiratory viruses,” Michael said. “They spread through droplets. When you have warm weather, droplets evaporate very quickly. And also on the surfaces, the viruses will degrade faster. That’s why respiratory infections can spread more. They survive more during cold, dry seasons like Winters.”

Data from Johns Hopkins University shows new infections have dropped to an average of more than 74,000 per day. That’s a 57 percent fall from the delta wave’s peak level of 172,500 new cases per day on Sept. 13. But that downward trajectory has plateaued. It’s recently been bouncing between 70,000 and 75,000 new cases a day for nearly four weeks.

Scientists say a combination of colder weather and low vaccination rates in parts of the state are driving the recent flare-up.

“For example, Vermont,” Michael said. “It’s got very high vaccination rates, but we are seeing a resurgence of cases post-vaccination in Vermont. Why? I think that’s a deeper issue. One of the hypotheses we are testing is that vaccine-induced immunity may not be as effective and as long-lasting as naturally acquired immunity. So, that could explain what we are seeing in Vermont, but we still don’t know.”

Doctors say it’s more likely vaccinations will control the increase and decrease of COVID cases across the nation. It just depends on when immunity wanes.

“Vermont is at about 8 percent in naturally acquired, whereas, in Florida [it] is 32 percent,” Michael said. “So, that could be affecting what we are seeing in the southern states.”

While Florida was one of the worst states for COVID-19 cases, it’s now making steady progress with the lowest case rate in the nation.

“If immunity is permanent, this is the end of the pandemic,” Michael said. “But Vermont is warning us that immunity may not be long term. Even in Florida, we are going to see, I think going forward, a slight rise in cases because the vaccine-induced people will be losing their immunity.”

RELATED: COVID-19 boosters for all adults could be available this weekend