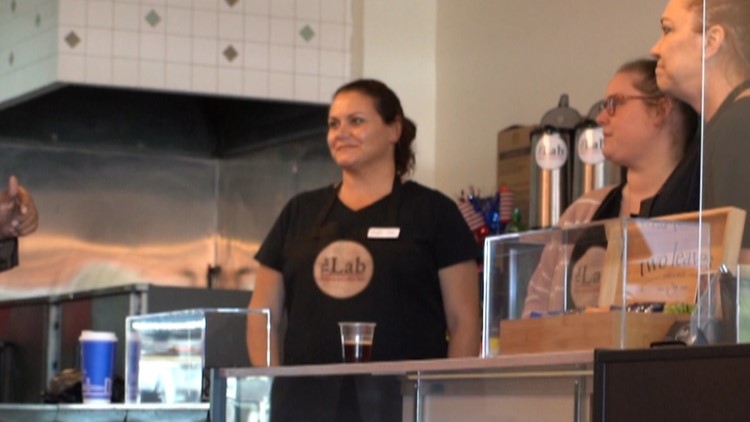 “We know there is a process,” entrepreneur Amy Hales said. “It takes time to market yourself, it takes time for a community realize you are here.”

ORANGE PARK, Fla — Imagine starting a business at a time when others are closing. For some, the uncertainty and the fear of failure would be terrifying.

In October 2021, Amy Hales, her mom Mary and her cousin Janet decided to open The Lab Bakery and Coffee Bar in Orange Park.

“So far the traffic has been good,” she said.

Her mom is retired, so is her cousin Janet. Amy decided to leave the corporate world to first help her mother in business and then became an entrepreneur.

“People kept telling us you really should do something with these cakes they really are amazing,” said Hales.

The journey began eight years ago and has evolved with the three women as business partners into a new name and a new location.

Each day they begin at five in the morning filled with optimism. The Lab is more than a place for a cup of coffee and a slice of cake. It is a place to connect with the Orange Park the community.

“We know there is a process,” Hales said. “It takes time to market yourself, it takes time for a community realize you are here.”

So was starting a new business during a pandemic the right decision? She said they would do it all over again.

Her advice to anyone with dreams of owning a business is to pursue your dream.

“Brainstorm what you are trying to do. Make sure you have a good product or service,” said Hales. “I would strongly suggest connecting with the Jacksonville Chamber of Commerce they have a program called Jax Bridges. I went through it it was absolutely amazing.”

She said the program helps you to count the costs of starting a new business and how to develop a plan.

Hales also said don’t be afraid to make mistakes, you will find there are lessons in your mistakes.

The three women are confident that what they’ve started will continue to grow in the months ahead.

“So I don’t know if there is too much that I would have done differently,” said Hales.