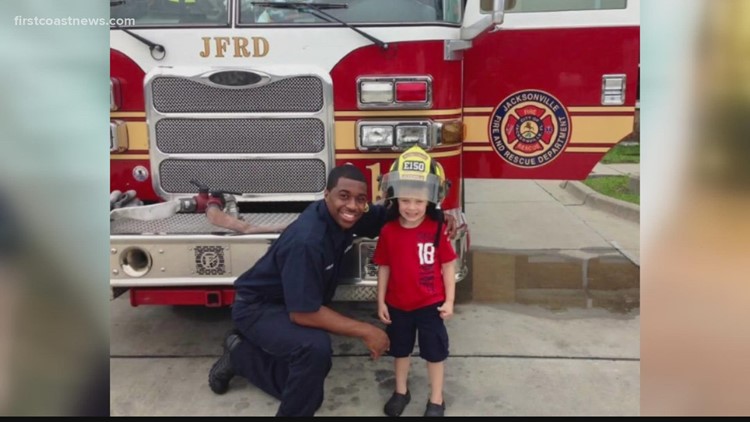 Michael Freeland was a firefighter for over seven years with the Jacksonville Fire and Rescue Department.

JACKSONVILLE, Fla. — Hundreds joined in on a procession Friday for Michael Freeland, a Jacksonville firefighter who died while serving the community.

Freeland died Thursday morning while working a crash involving a U-Haul truck. There were live wires near the crash scene.

At this time, his cause of death is under investigation.

Freeland was 36 years old and engaged to be married.

He was a firefighter for over seven years with the Jacksonville Fire and Rescue Department.

His family says he would help anyone and that he was a selfless person.

“He loved his job. He loved people and to know he was trying to save a life and he lost his life… that’s everything. That is who he was,” Hazel Yates-Campbell said.

Yates-Campbell is Freeland’s aunt and she says she and her family are thankful for the fire department and the entire city for stepping in to support them.

“Thank the fire department, the city,  everybody who has been here and who has sent messages and love and who will continue to pray for our family,” she said.

The family has not set funeral arrangements, but when the announcement is made public, we will update this story.

First Coast News is also working to learn the condition of the woman who was trapped inside the U-Haul truck.