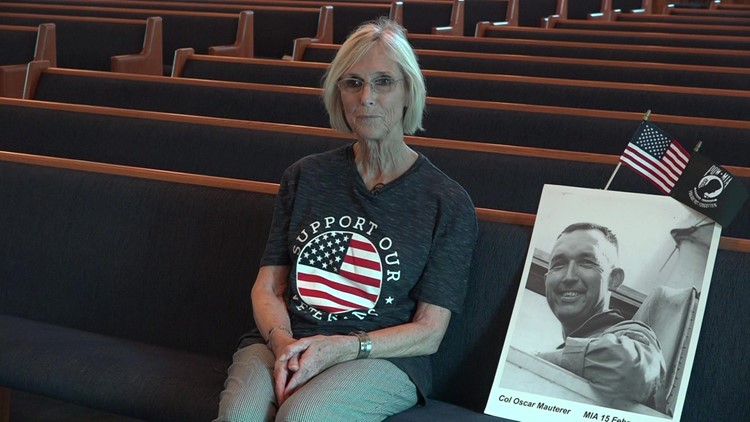 The future plans for the National POW-MIA Memorial and Museum include a hall where the names of all the MIA soldiers will be projected on a glass wall.

JACKSONVILLE, Fla. — While Veterans Day is a way to celebrate those who served our country, it’s a difficult day for others who are still waiting on their loved ones to return home.

One Jacksonville woman has found hope in a local project to remember her father and the thousands of other MIA soldiers.

As American flags filled the air, Pam Cain waved back from a float.

She didn’t know she’d get as emotional as she did during her first time being a part of Jacksonville’s Veterans Day parade.

“It’s with me every day,” Cain explained. “I get emotional every day, but my dad is always with me, always a part of me. I just would like him to be home, and buried in his country.”

It’s been 55 years since her father, Air Force Colonel Oscar Mauterer, went missing while serving in the Vietnam War.

Now, Cain is involved in a group in Jacksonville that’s trying to help remember her father and the tens and thousands of other soldiers who went missing in action.

The future plans for the National POW-MIA Memorial and Museum include a hall where the names of all the MIA soldiers will be projected on a glass wall.

Phase 1 of the memorial recently broke ground. It will honor all who were lost while stationed at NAS Cecil Field.

“We started construction, but COVID did set us back a little. But now we’re going to get it finished, thanks to Vystar,” Mike Cassata, Pow-MIA Memorial Executive Director said. “Vystar is a huge supporter. We’ve got a matching $150,000 fund that we’re trying to get together.”

Recent additions to the property include a Gold Star Families Memorial and Vietnam plane.

While she waits for the MIA memorial to be built, Cain wants others to not forget about those still unaccounted for this Veterans Day.

“In my dad’s case, he and the other MIA’s are unreturned veterans. So, they should be honored and remembered on Veterans Day as well,” Cain explained. And we need to always commit to getting that fullest possible accounting for him, and all of them.”

If you would like to donate to Phase I of the memorial, Cecil Field POW/MIA Memorial, Inc. is raising funds on its website.