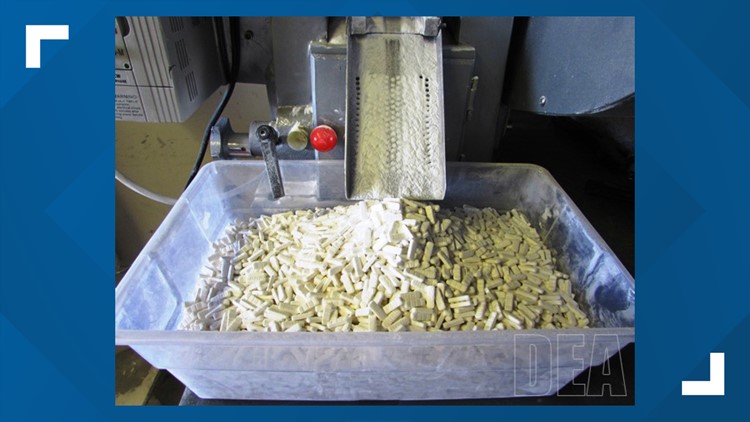 As overdose deaths in the U.S. reach a record high, the DEA is seeing a dramatic rise in the number of fake pills containing a potentially deadly dose of fentanyl.

JACKSONVILLE, Fla — “We miss him. We miss him a lot,” Steve Betz said. “The holidays aren’t the same. When his birthday comes around, man, it’s a big void.”

It’s been just over one year and one month since Steve Betz lost his oldest son, Tony.

“I found my son on September the 30th. I hope no parent ever, ever has to go through that,” Steve Betz said. “It’s hard. He was the life of the party when he was around you. He was just loud. And his bear hugs and his smile and just his presence is what we really, really miss about Tony. He’s just a beautiful human being.”

Tony was just 32 when died of an overdose leaving behind a young son. He father says his son loved God and loved his family. He remembers their very last conversation.

Today battled an addiction for years. His father says it all started with pills.

“Very proud of Tony for how hard he fought because he didn’t want to live that way. He didn’t want to be the person that he was when it was using,” his dad said. “It took a long time to read the death certificate, but it was fentanyl that killed my son.”

Tony’s story is not an isolated case. He is one of nearly 100,000 people who died of an overdose in the United States between March 2020 and March 2021, according to the Centers for Disease Control and Prevention.

During the first half of 2020, deaths caused by fentanyl in Florida increased by 81%, making it the most dangerous drug in the state, according to Project Opioid.

For the first time in six years, the DEA has issued a Public Safety Alert to warn about an alarming trend that could cause even more overdoses. The cartels are now lacing counterfeit pills with fentanyl and meth to make them more addictive.

Look at these two pills pictured above. Can you tell which one is fake? Hibbert says the only way to know is to have them tested in a laboratory.

“There are no red flags. It looks identical,” Hibbert said. “It is available right now, in the Jacksonville area and across the state of Florida.”

The DEA says China is supplying chemicals for the manufacturing of fentanyl in Mexico where the counterfeit pills are being massed produced.

“They have distribution networks throughout Mexico to get it into the United States,” Hibbert said. “In a surge from August 3 through September 27, the DEA seized 1.8 million fake pills off the streets. That’s enough pills to kill more than 700,000 Americans.”

Think about the tip of a pencil, that small amount of fentanyl can kill you. Hibbert says two out of every five pills with fentanyl contain a potentially deadly dose.

“One pill will kill you. One pill will kill. That is the message. Don’t take anyone else’s prescription. Even if you know them, don’t take it because that very pill can be the last time that you see a loved one,” Hibbert said.

Dr. Lantie Jorandby, Chief Medical Officer at Lakeview Health, is an addiction psychiatrist. She has seen the grave impact the fake pills are having.

“We’re just in a real emergency situation. And the problem is that we have people that have never used a drug before that might just be out of their prescription and they find a pill or they obtain it some way and they end up dying or they end up seriously sick,” Dr. Jorandby said.

Taking a pill not prescribed to you is like rolling the dice with your life. She says if you experiment one time it could kill you.

“With this new fentanyl that is out there, it is not your prescription fentanyl. It’s not something your doctor writes. It’s a what we call an analogue or a chemical version of fentanyl that very enterprising people are making in labs,” Dr. Jorandby said. “It is sometimes a hundred, a thousand times more potent than what people are used to with a prescription. So that’s the real harm is that you don’t know what you’re getting.”

Children and adults are being targeted without even leaving their home as the DEA says drug dealers are hiding in plain sight on social media.

“We actually had someone who ended up at the morgue because they had taken this really, really potent fentanyl that looked like a pill. And they tried to bring this person back with Narcan,” Dr. Jorandby said. “They had to give them four doses. And eventually felt like they had passed away and this guy woke up under a sheet and ended up in our treatment center because that is how potent this stuff is.”

For the drug cartels it comes down to profit. The more people who are hooked, the more money they make.

“They’re capitalizing on Americans who may not be able to afford certain legitimate prescriptions. They are looking to addict people. So, if they lace fake pills with fentanyl and methamphetamine, they are looking to addict the user,” Hibbert said. “People who are not even taking any opioids and are not addicted, can become addicted, because it’s laced with methamphetamine, and that’s what they’re gaining on.”

Tony’s father and stepmother hope by sharing his story it will spare another family from going through the pain they’ve endured.

“If Tony would have known when he was young that that first pill was going to lead to the twelve years and then the end, he would have never done it,” Jenny Betz said. “So, let’s take that knowledge and use it to maybe have another child not even start.”

“I want people to know it is everywhere, and it doesn’t discriminate. It’s in every neighborhood, rich or poor, white or black,” Steve Betz said.

He is now involved with Project Opioid, a coalition bringing together business, faith, government and philanthropic leaders to reduce opioid deaths. As he fights the war on drugs, he hopes you will talk to your kids about the dangers and remember his son Tony.

“I hope that they see a beautiful full life was lost to a senseless addiction, something that could have been prevented, sold by someone who doesn’t care about human life,” Steve Betz said. “His life was worth more, let’s learn from it. Let’s save that one more life. Let’s get those dealers off the street. And let’s stop any, any other family from having to go through the pain that we’ve been through.”