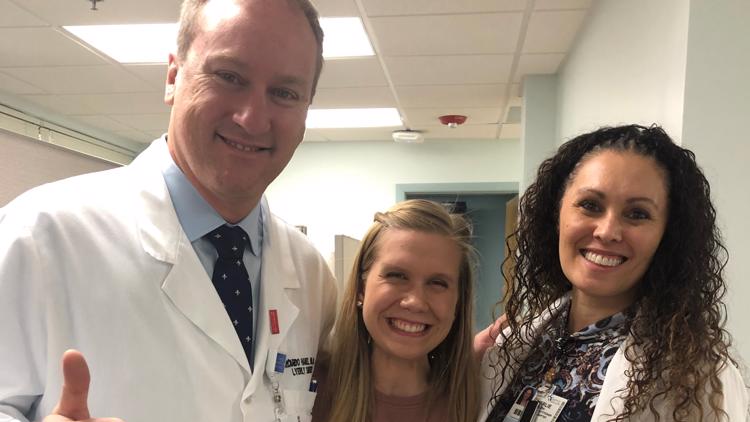 Arianna Grondin had brain surgery in 2019. She was furloughed from her job in 2020 and next month she will graduate from FSCJ with a degree in nursing.

JACKSONVILLE, Fla. — Life threw Arianna Grondin a curveball in 2019. Recovery from brain surgery, to remove a tumor, took months, and it sidelined her desire to become a nurse.

“It completely changed where I was at the time,” Grondin said. “It was five months before I could drive, six months before I was back to work fulltime. Which meant I was not going to nursing school as I had planned.”

The following year didn’t go as planned either. She was furloughed from her job as a website designer.

Like many who were unemployed during the pandemic, she tried to manage her finances. The cost of college seemed out of reach until an email changed the course of her life, again.

“It was incredible,” she recalled. “It was exactly what I needed, and I kept thinking, ‘This has got to be too good to be true.'”

“We are all about helping you find your next job and your next career,” explained CEO Bruce Ferguson.

CareerSource targets those looking to enter or get back into the workforce with programs including interviewing classes, job searches, resume writing and scholarships.

Grondin was awarded a scholarship which allowed her to go back to school through CareerSource’s ‘Individual Training Account.’

“We would love it for someone who is looking to make a career change or upskill themselves to come see us and see if we can help them,” said Ferguson.

CareerSource has targeted five industries that are in greatest need:

In partnership with several local colleges, Grondin was one of 330 people to receive a training scholarship through CareerSource last year. Ferguson says there is money still available this year.

Grondin was able to pay for college and plans to complete her associate degree in nursing from FSCJ this December. She hopes to specialize in neuro neo-natal care.

For all that she went through, Grondin found a silver lining.

Follow this link to learn more about CareerSource, including in-person and virtual workshops.