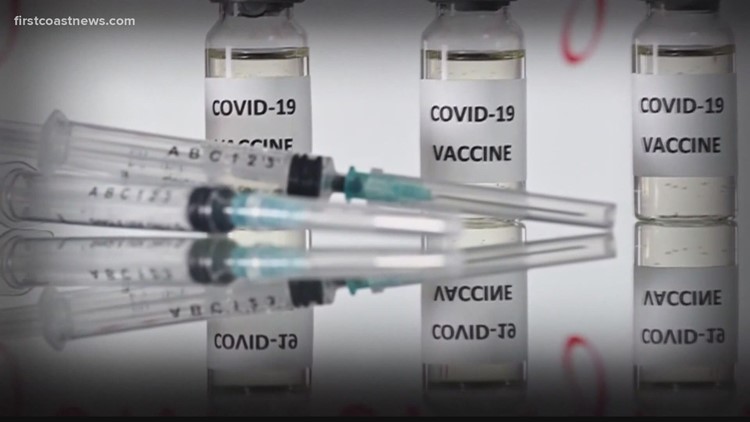 The nation’s top doctors say the COVID-19 vaccine is safe and effective, but some people are still not comfortable getting the shot.

JACKSONVILLE, Fla. — No shot in the arm, and no paycheck in your bank account.

Some large companies and private employers are requiring workers to be vaccinated or lose their jobs. The nation’s top doctors say the COVID-19 vaccine is safe and effective, but some people are still not comfortable getting the shot.

In July, President Biden began rolling out vaccination requirements for federal employees and contractors and calling on employers to do the same.

According to the Kaiser Family Foundation, more than a third of unvaccinated workers say they would leave their job if their employer required vaccination or testing. Some companies, across the country, are firing workers for refusing to comply with vaccine mandates.

First Coast News spoke with a Jacksonville woman who is unvaccinated. The woman says she will be out of work after 30 years at her current job.

She asked not to be identified.

“The chances of me getting a job are going to be limited,” the woman said.

The woman, who is in her 50s, says she is not against the vaccine.

“I choose not to for health reasons.”

She says she has applied for an exemption with her employer and received no response.

“Everybody should have their own personal choice,” she said.

However, that choice comes at a cost.

“Unless you’re a union employee and you’ve got the ability to grieve your disciplinary actions or your termination, or you’ve got a “for cause” termination employment agreement, you’re not going to have much recourse for that kind of termination if you’re not abiding by an employer’s request to get vaccinated,” James Poindexter explained.

James Poindexter is a labor and employment attorney. He says in most cases Florida employees are entitled to unemployment benefits. But, those benefits disappear when a worker fails to adhere to a company policy.

“Especially when it is a policy you’ve been made aware of and you’ve willfully violated,” Poindexter said. “An employer is generally not going to be required to pay unemployment insurance to an employee.”

Websites like RedBalloon.work and NoVaxMandate.org are popping up with employers who are offering to hire workers who are not vaccinated.

Governor Ron DeSantis says a Special Session to provide protections for Floridians who have lost their jobs or are having their employment threatened due to vaccine mandates will begin on November 15.

Some of those proposed new laws include prohibiting private employers from firing those who have recovered from COVID 19 or have health or religious concerns.