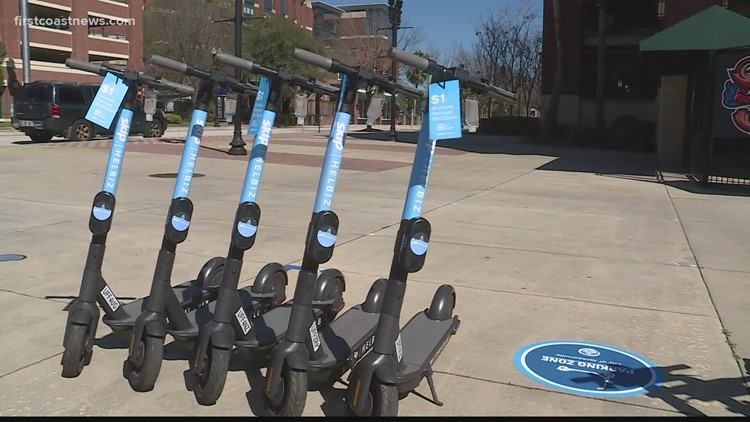 The Dockless Mobility Program paved the way for people to zip around Downtown on the e-scooters. Now, DIA is conducting a survey to determine the program’s future.

JACKSONVILLE, Fla. — (Note: The video above is from a previous related report.)

The city wants to hear your thoughts on the pilot program that has brought electronic scooters to the streets of Downtown Jacksonville for the last year.

The Downtown Investment Authority’s Dockless Mobility Program paved the way for people to zip around Downtown on the e-scooters. Now, DIA is conducting a feedback survey to determine the future of the program.

The survey asks about things such as whether scooter riders live, work or visit Downtown; how often and where riders use them; how safe riders feel and their knowledge of the city’s laws regarding scooters; and whether the rider’s overall experience with the scooters has been positive or negative.

The scooter pilot program launched in March, allowing riders to check out scooters via a smartphone app and dropping them back off at 35 designated “corrals” around Downtown. The program’s purpose was to provide more options for pedestrians and bicyclists Downtown with healthy, viable and environmentally sustainable transportation alternatives.

The City Council voted unanimously to adopt the one-year pilot program in February to include e-scooters and e-bicycles. The launch of the e-bicycles has not yet been announced.

There are several different companies that own the scooters and operate the apps required to rent them. Each company has its own app, most charging $1.00 to unlock the scooter and $0.39 per minute to ride.

While many riders have enjoyed the scooters safely and in good fun, they have not been without some controversy. Within the first month of the pilot program’s launch, one rider was hit by a driver who initially stopped, but then drove away. Another rider was arrested for crisscrossing a double yellow line, something the sheriff’s office report called a “rampant and very dangerous problem.”

In June, a viral TikTok appeared to show a group of teenagers throwing one of the machines into the St. Johns River. That prompted city leaders to impose a scooter curfew, rendering them inoperable from midnight to 5 a.m.

For information on scooters in Downtown Jacksonville, including discounts, maps and more, click here.