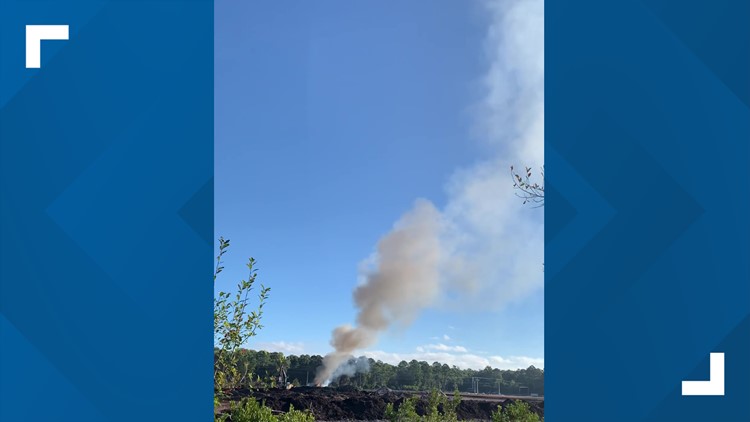 During its meeting Monday night, county commissioners voted 3-2 to approve an agreement with the developer, Century Communities.

FERNANDINA BEACH, Fla. — After it temporarily stopped due to health concerns, the highly-controversial burning near some Nassau County neighborhoods is set to start back-up again with new requirements.

During its meeting Monday night, county commissioners voted 3-2 to approve an agreement with the developer, Century Communities.

The new requirements in the agreement include:

The county attorney says Nassau County may also suspend burning activity for the day if Century Communities does not meet the agreement.

Despite the new requirements, homeowners say they’re worried their health issues will come back when the burning of land clearing debris resumes.

Two years ago, Anthony Aviles moved from Maryland with his wife and two dogs to get away from the cold air. Those conditions were tough on the permanent trach he received after he was diagnosed with throat cancer.

Now, he’s worried about smoke and soot returning to the air in the Harbor Concourse neighborhood, which affected him during his daily walks with the dogs.

“We couldn’t go outside. You ran outside and jumped in your truck and you drove away. You can’t walk your dogs. We were prisoners from the smoke next door.” Aviles said. “I’ve been around campfires, a house burning down, never had anything burn my throat and irritate my eyes like that.”

Aviles says one day he started blowing up blood from his trach.

“It was pretty scary. I was sick pretty good for a week here from the smoke,” he explained.

Aviles says he had to treat himself with liquid saline and spray before he could feel better.

In another nearby neighborhood, Marty and Mary Ann McNulty say their health also declined while the burning of debris happened across the street.

“This is our home. I mean, we built it. Everything that we want is here,” Mary Ann said. “And we plan on staying here forever, but we can’t breathe.”

Marty started having consistent headaches and Mary Ann was diagnosed with asthma.

Marty, who worked with the Jersey City Fire Department for more than three decades, is an expert on fire and hazmat incidents. He says he’s worried that there hasn’t been a device specifically monitoring the air quality near the burning.

According to the Florida Department of Environmental Protection, it’s “not aware of any monitors that have been specifically set up to monitor the air quality near the specified developer’s site.” However, the agency says, there are two its air quality monitors located within ten miles of the operation.

“The smoke is supposed to go up and disperse. Well, it didn’t. It came over to this side of the road, and at times it was like a cloud outside,” he described. “I’m truly concerned that the amount of smoke that was being generated was obscene, and it exceeds what the Florida Code provides for.”

Century Communities’ burning of land clearing debris has been called a pile burn by some Nassau County officials in the past. However, according to the Florida Fire Service, it’s actually an air curtain incinerator, which means material is put into a dug pit before it’s burned. The agency says its supposed to burn “cleaner, hotter” than a pile burn.

The authorization of an incinerator happens by the FFS on a day to day basis based on different parameters such as weather conditions.

The agency says it’s received “numerous complaints” about the burning over the past few months, so it went out to check on the site between 10-15 times. Every time the developer was found in compliance with Florida’s open burning laws, according to the FFS.

The On Your Side team has made multiple requests for an interview with Century Communities’ attorney, but they have denied those requests. A written statement was also requested after the vote Monday, but one has not yet been provided.

Aviles says he doesn’t want himself or any of his neighbors to suffer when the burning starts up again.

“What is my health worth, over some wood being trucked out of here to burn?” he explained. “I mean, I think my life is worth a lot more than $1,000 a truckload.”

The On Your Side team also reached out to the DEP. The agency says it has also received four recent complaints about the burning of land clearing debris by Century Communities, and it’s now investigating the operation.

Additionally, part of the agreement is that it will also monitor the air quality on a complaint basis.

After our first story ran weeks ago, the @FCN2go continues to investigate the burning pile of debris in Nassau County, which homeowners tell the On Your Side team made them feel like “prisoners of the smoke” pic.twitter.com/rc0Fpq5PUz