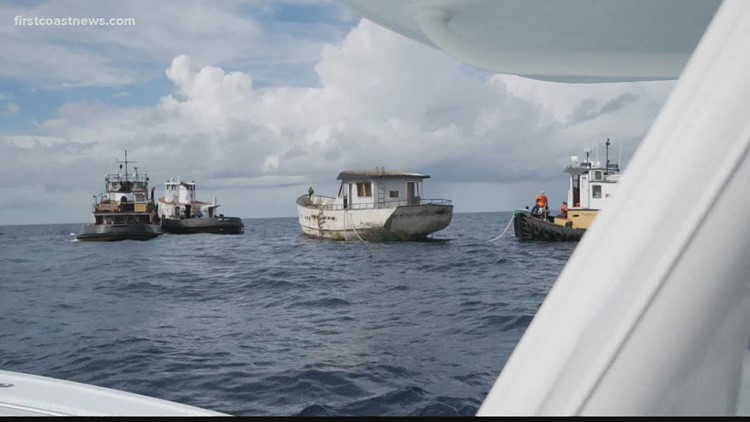 Ships are meant to float, but not in this story. These sunken boats will become artificial reefs.

JACKSONVILLE, Fla. — Heading out into the Atlantic one recent October morning, Harold Conger is about to witness something a captain usually doesn’t want to see: The sinking of two ships.

“That’s usually a bad thing!” Conger laughed. “In this case, that’s what they want to do.”

Joe Kistel and his group work to create artificial reefs. It’s called Think It Sink It Reef It or TISIRI.

“This project was several years in the making,” Kistel noted.

Kistel was in charge of the sinking of an old sailboat and a large tugboat 28 miles off the coast of Jacksonville. The site, 90 feet below the water’s surface, is a permitted artificial reef site.

The method of sinking the boats is quite simple. Plugs are pulled in the bottom of the boat allowing water to slowly fill the boat with water.

Before the ships sank, Kistel and his team were onboard, putting cameras on them in order to get those video images of what they looked like going down.

More boaters gathered around to help and to watch.

“They are in a rush now! All hands on deck,” Conger observed from his own boat, not far away.

“I’d like to see that sailboat in its good days, Conger said. “It’d be quite a vessel.”

In fact, that sailboat was one man’s dream boat. He had it custom-made, but never fully finished.

“[The tug] was a Navy tugboat. It had this service of life for however many years,” Kistel explained. “You had people living on it for years at a time.”

Both ships no longer are viable vessels on the water. Kistel’s team acquired them, and MOBRO Marine helped strip them of anything that could damage the environment on the ocean floor.

And then after watching the slowly fill with water, the sailboat slipped under the waves. Then the tug followed after.

“A long life of service and here she goes!” Conger remarked as the tug slipped below the surface.

Both sinkings brought cheers. Those cameras attached to the boats caught the action.

“If you’ve ever seen the movie ‘Titanic,’ when you watch the video, this is what it looks like,” Kistel said. “So the helm cameras are looking where the captain would be skippering the boat. As it went down, the water came in the helm area and this blue wall comes in and then encompasses the whole vessel, and then it sinks to the floor.”

“You can actually watch the boat impact the sea floor which was really amazing,” Kistel added. “So we have proof of how they landed and they are upright.”

These shells of ships will become sanctuaries for marine life

“Probably within a few weeks, there’s gonna be a lot of fish already on it,” Kistel said.

He and his team sank a ship nearby in 2009, and it is teeming with fish now.

“Over time when you get more growth and the corals and sponges and those types of things, that’s when the diversity really starts to multiply,” he explained.

It’s great for diving and for fishing, which are two multi-million dollar industries in Florida.

A couple weeks later, Kistel and a colleague went 90 feet below to check on the ships.

“It’s kind of encapsulated under the ocean,” Kistel decribed. “You can kind of envision the sailors working on this boat, you know, so many years ago. And it just kind of adds to the interestingness of being able to scuba dive these reefs. Even when you’re up top and fish, and every time you bring up a fish and realize, ‘Okay, yeah, there’s a ship down there.'”

“Now it’s this recycled asset that has created this destination and a totally different use but it is still providing service,” he added.

“You hate to see a good service vessel go down like that but people’s grandchildren can be diving on this thing or fishing on it,” he said. “It’ll have a purpose out here.”

It’s a marine mecca. Once it was a gathering place for life above the water… and now, it’s full of life below.