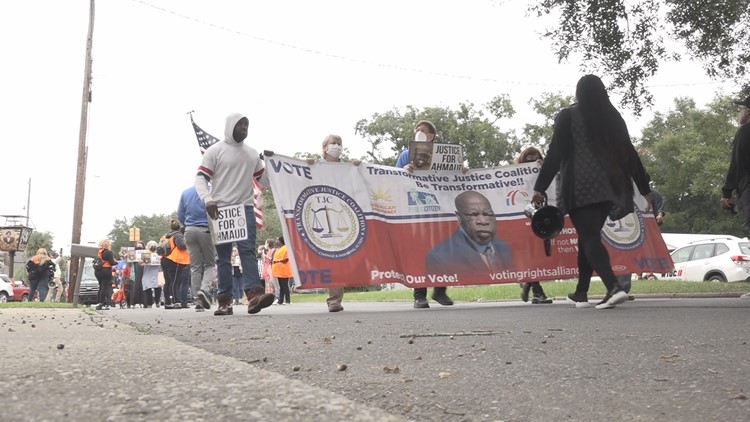 Like the steps they took around the courthouse, the fight for justice is slow and steady.

BRUNSWICK, Ga. — Outside the Glynn County Courthouse, a group of demonstrators lead a march Thursday in solidarity with the Arbery family.

They said it was about showing the nation their push to see the family get justice. Demonstrators with the Transformative Justice Coalition said they are keeping the pressure on inside and outside the court.

To activists, events such as this shows that people in Brunswick care about what happened to Ahmaud Arbery.

While this wasn’t the first march demonstrators have done, it is their way of showing love and support.

More than a dozen demonstrators and supports marched around the courthouse. When the march toured through Brunswick neighborhoods, a handful of people participated in the event.

It was a three mile march around the courthouse. Arbery’s father, Marcus, lead the march. Demonstrators stopped at the 25-year-old’s mural and said a quick prayer; hoping for justice.

“You are showing the world what it takes to get justice in one of the most difficult cases ever,” Barbara Arnwine said, another leader behind the demonstration.

The trial has been under scrutiny, especially after the news of a jury that’s predominately white. To Jones, marching means activists are certain that the “pressure remains on the system to get it right.”

Another march is already scheduled for next Thursday, November 11.