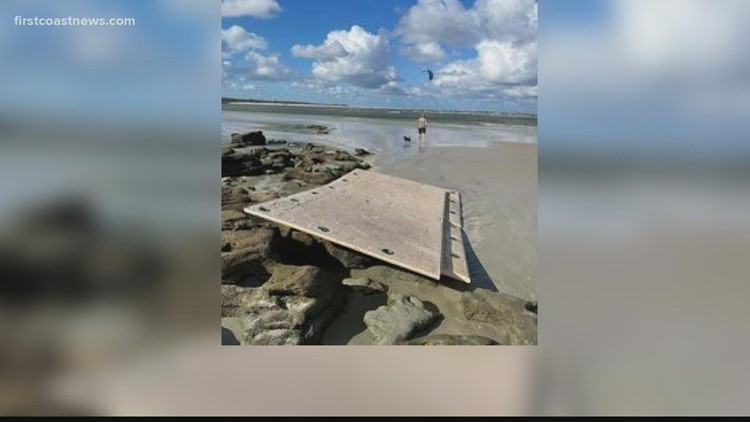 “We’d never seen anything quite like it,” one beachgoer said.

“We were at a deck on our vacation property,” Barry Fouts recalled. From his deck he saw something on the beach below, right by the Matanzas Inlet in St. Johns County.

“We noticed this huge something out there on the side of the beach,” Fouts said. “We took a look at it trying to figure out, what is this thing? We’d never seen anything quite like it.”

That was early October.

Since them, other people have posted on social media that they too have seen these large planks of plastic either floating in the water around that area or beached on the sand.

Fouts and his wife saw three of them on the beach.

The planks are about eight feet by ten feet, Fouts estimated. They look a lot like big construction mats that are laid down on the earth to keep heavy machinery from sinking.

There happens to be a dune restoration project going on, less than a mile north of the Matanzas Inlet, where Fouts saw those objects.

“Those mats belong to our contractor, Continental Heavy Civil, who’s wrapping up the FEMA dune enhancement project in the Crescent Beach area,” St. Johns County Public Affairs Director Lorena Inclan Arias said “A total of 30 mats that were latched together with wire rope came loose and floated away during a strong nor’easter recently. The good news is the majority of the mats have been recovered. CHC is actively searching for a couple of mats that may still be out there. Going forward, the contractor is working to re-latch the mats with heavier rope to prevent this from happening again during another storm event or high tide.”

This shows the power of the ocean because according to a manufacturer’s website, those construction mats can weigh more than 1,000 pounds.

Many folks, including Fouts, are concerned the mats could damage a boat… and the people inside.

“We just came back shaking our heads like, ‘That’s going to be really dangerous if someone runs into that on the water,'” Fouts said.

“Please note, these mats are necessary to facilitate the movement of dump trucks on the beach in order to dump much-needed sand in the project areas,” Arias said.