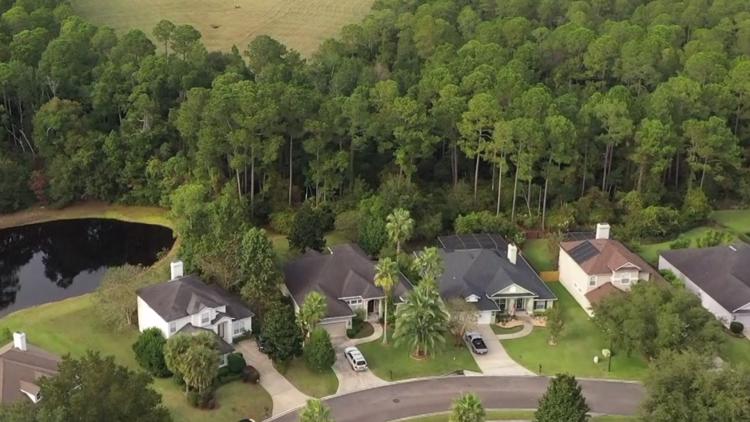 It’s an odor that has been permeating the neighborhood for years, one that the county says it’s looking into and one that neighbors are tired of living with.

YULEE, Fla. — Sewage with a hint of rotten eggs is how some residents in a Nassau County neighborhood describe the smell of the air.

It’s an odor that has been permeating the neighborhood for years.

Booth says the smell is strongest in the morning when she takes her dog for a walk through her Lofton Pointe neighborhood.

She, along with almost 600 other neighbors, signed a petition asking Nassau County leaders to investigate the odor. Neighbors point to two possible sources: JEA’s Nassau Water Reclamation Facility or an old landfill

“There was an old dump out there, they covered it up, but I don’t think the county anticipated on the growth back the,” said another North Hampton resident Robert Wylie said.

First Coast News took a drone into the sky to get a look. Both facilities separated from the neighborhood by a tree line.

A spokesperson for JEA said their facility is functioning properly and the odor is not coming from the property. According to a statement by JEA:

The odor is not coming from JEA’s Nassau Water Reclamation Facility. JEA’s operations and maintenance team has determined that the plant is functioning properly and has no abnormal conditions. JEA takes environmental stewardship seriously. We are cooperating with regulatory agencies in their efforts to identify the source of the odor.

Nassau County released a statement of their own denying it is the old landfill:

“To my knowledge, we have not received any official complaints to our office, however we have seen discussions online amongst the residents on social media. At this time, it is not clear which parcel this odor is coming from however we are currently looking into it. There is an old County landfill in this area…closures are done in accordance with requirements outlined by the EPA and that the County is required to continue post closure monitoring for 30 years after its closure. We do not believe this property is the source of the issue but again, we are investigating at this point. Once identified, we will determine how to move forward.”

In the meantime residents along Amelia Concourse are worried about the environment and health impacts that could be hidden behind the smell.

“Personally it does affect breathing the smell can be extremely obnoxious and very worrisome because I don’t know what I’m breathing in, I don’t know it its methane gas or something else,” Booth said. “We are on city water, is this leeching into the water, we don’t know.”

The department of Environmental Protection also tells first coast news they are actively investigation the source of the odor.