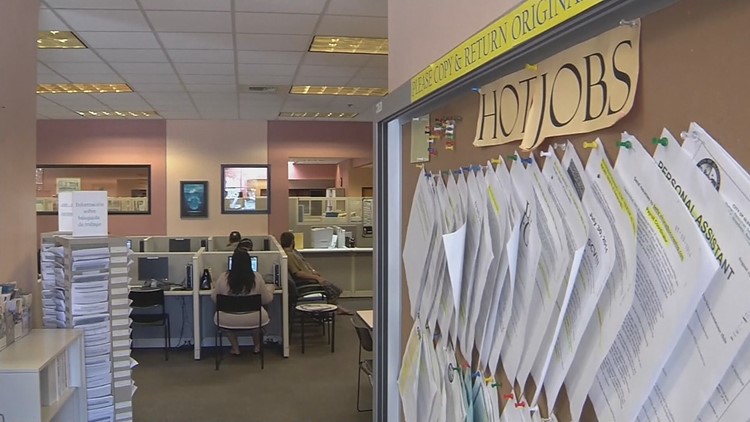 Thousands of Floridians are trying to get hired and get out of the unemployment maze.

JACKSONVILLE, Fla — Pre-pandemic, Kathreen West called the classroom her office. Now, we are chatting on Zoom.

“It’s kind of risky for me to be in a classroom right now,” West said. “If I go back to work, do I put my life at risk and get COVID and die?”

It’s about month 17 of her unemployment. She lives in Titusville, Florida.

“I’ve done over 100 applications in the past couple of days,” West said.

Safety is key during her job search. Benefits are also a priority.

The biggest job growth since April 2020 in Florida has been in the hospitality and leisure industry. West said it’s not likely you’ll get health care benefits working food service.

Brito works tirelessly to get people their unemployment benefits, but also to help them get back in the workforce. She said there seems to be a hiring lag when it comes to age.

RELATED: Walmart plans to hire 150,000 workers for holiday season ‘and beyond’

Data First Coast News requested from Florida Department of Economic Opportunity shows about 218,000 Floridians over the age of 45 were unemployed over the last 12 months, though the biggest single age group of unemployed Floridians is actually the 25 to 34 range with an average of 129,500.

Now hiring signs are everywhere, but Floridians tell me it’s still a struggle to find a job. People tell me they’re applying to hundreds and only getting 1 call back.

It also boils down to the offer. Are there benefits? Will I be able to pay my bills on this wage? More on #GMJ. pic.twitter.com/pssp2AJR5L

No matter which age bracket you fall in, people are competing with each other for many of the same jobs.

Florida’s unemployment rate is at 4.9% as of September 2021. New numbers will be released in November.

Taking a closer look at the First Coast, DEO data shows Nassau (3.2%) and St. Johns County (2.9%) have some of the lowest unemployment rates in the state. Putnam County (5.9%) has one of the highest rates statewide.

Florida DEO says the state has regained 83% of the jobs it lost since April 2020.