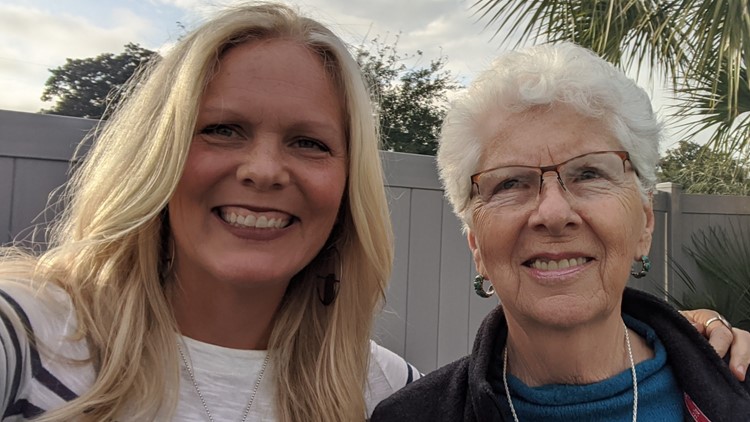 Anne and Kimberly Tashlein are sharing their diagnoses in hopes to spread awareness of the dangers of AFib when left untreated.

JACKSONVILLE, Fla — At the beach, at the garden or in their living room, Kimberly Tashlein and her mother Anne have so much in common.

“We like thrift store shopping, and we love meeting for lunch,” Kimberly says. “We have a little spot here at the beach or we do a lot of visits together.”

The similarities are beyond skin deep. Kimberly at 50 noticed something different.

“Very fatigued. Breathless. I thought, what’s going on?” she wondered. “You just dismiss it. I never once said it was my heart.”

“She was flying into rapid atrial fibrillation,” Magnano described. “Very rapid heart beats. Getting up to 200 beats a minute.”

He diagnosed her with AFib. The irregular heart beat can affect your daily life and puts you at a five times higher risk for strokes.

“If it goes on long enough at a rapid enough of a heart rate, it can produce congestive heart failure,” Magnano warns.

“I was attributing some of the same symptoms, but don’t forget, those can also be symptoms of COVID,” Anne says. “So I thought my goodness do I have COVID? Or I just turned 80, so I thought I’m just tired because I’m getting older.”

NEW on #GMJ: Kimberly (left) was 50 when she started feeling fatigue and breathless. She was diagnosed w/ AFib. 3 months later, her 80 year old mother Anne received the same diagnosis. They’re sharing their story on @FCN2go. pic.twitter.com/l5uAVh9Ly6

Anne, 80, was surprised to also be diagnosed with AFib. Their diagnoses were three months apart.

Both underwent ablation surgery. Magnano operated on both mother and daughter.

In between their surgeries, Kimberly got another surprise from her brother.

“He said guess what else we have in common? He said AFib,” Kimberly says.

Now the mother and daughter, as well as her brother, have something new in common. After their ablations, they say they now have steady, beating hearts.

November marks one year since Kimberly had her surgery and she wants people to know the signs.

To catch AFib, Magnano says learn how to check your pulse and keep going to your annual checkups. Doctors can hear a difference in the heart.