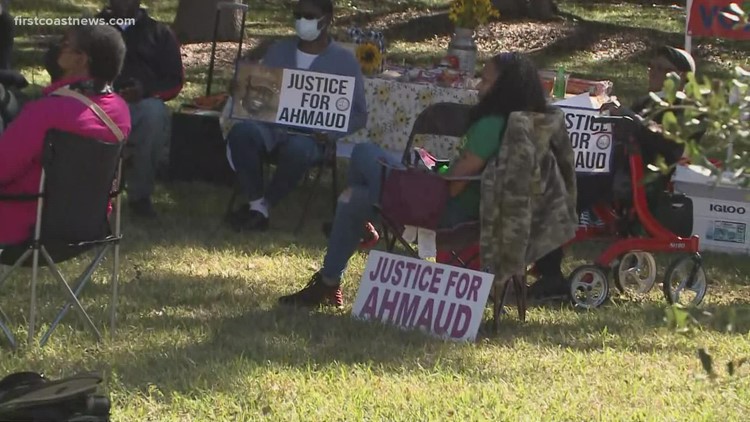 Attorneys are hopeful they will reach the needed number of 64 qualified potential jurors Tuesday, with opening statements possible Thursday.

Jury selection for the three men accused of murder in the death of Ahmaud Arbery continues Tuesday. Attorneys are hopeful they will reach the needed number of 64 qualified potential jurors Tuesday, with opening statements possible Thursday.

8:30 a.m.: Jury selection is scheduled to resume. On Monday, six additional potential jurors qualified, with four more needed to get to 64 in order to start final jury selection. Attorneys and the judge think they will reach 64 Tuesday, then strike Wednesday and finish up jury selection. Opening statements could be heard by Thursday. The defense Monday said they are concerned only 60% of those who received a summons are actually showing up, which they say could mean the potential pool may not reflect the accused.

RELATED: 60 percent of those who received jury summons showing up, defense says in death of Ahmaud Arbery trial

3:11 p.m. Travis McMichael’s attorney hints he may file a motion hoping to ensure the pool of potential jurors is fair and reflective of the population. He says he will not make a decision until the pool of 64 jurors is decided and believes he can get an impartial jury.

“At this point, we feel like the jurors who have been qualified are jurors who can give us a fair shot,” he said.

3:05 p.m.: First Coast News’ Kailey Tracy says she left a message with the clerk of superior court to find out how many potential jurors summoned have not come to court.

3:02 p.m.: Defense attorney for Travis McMichael says it’s “very concerning” that “60% of the jurors are not showing up. That is not right.” He says that means the pool of jurors showing up does not fairly reflect the accused. “The accused can’t look across the courtroom and see persons that are similarly situated to themselves, then it may be that they feel, and we as the lawyers feel, that we really don’t have a fair cross-section of the population. And that would be grounds to file some type of motion to have the court perhaps enforce some higher level of attendance than we’ve seen thus far.”

2:52 p.m.: Defense attorney for Travis McMichael says he expects jury selection to wrap Tuesday, with opening statements Wednesday or Thursday. He says he doesn’t see the potential juror who qualified Friday then was struck Monday as a setback in the process.

12:10 p.m.: Supporters of Arbery’s family gather outside the courthouse with signs reading “Justice for Ahmaud” and cheering the family on as they walk into the courthouse.

10:26 a.m.: Bryan’s Attorney Kevin Gough says four alternates may not be enough and asks the court to consider increasing the number.

10:25 a.m.: Judge Timothy Walmsley strikes potential juror 5, who qualified Friday, bringing the number of potential jurors qualified so far to 54. Another 10 are needed before selection can move to the next phase of final questioning.

8:30 a.m.: Jury selection is scheduled to resume Monday. On Friday, Gough said he was concerned about what he called underrepresentation for his client among the potential jurors, a lack of “white males born in the South over 40 years old without a college degree.” Gough said he would be submitting the concern as a formal motion to look at whether this demographic is considered a constitutionally protected class of people who cannot be discriminated against.

RELATED: Defense attorneys concerned potential jurors summoned for trial have not appeared, 60 jurors qualified for next round of questioning