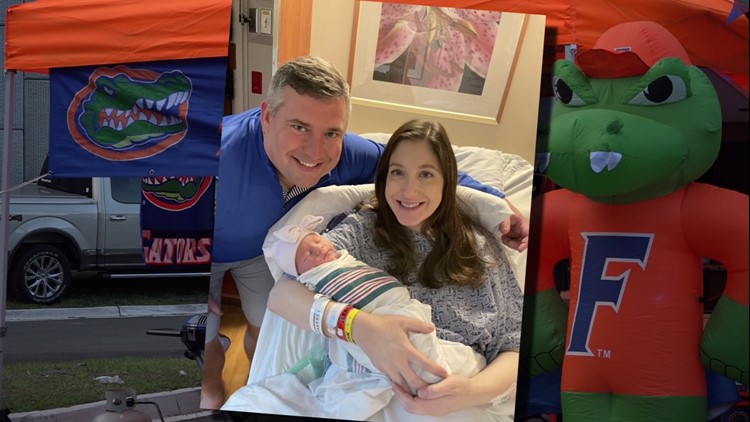 They go every year to Jacksonville’s Florida-Georgia game, but this year the couple had a baby on the way, due the same weekend as the big game.

JACKSONVILLE, Fla. — The Florida-Georgia game has become a tradition for many fans, and one Jacksonville man hasn’t missed a game since 1984.

However, this year he sold his tickets last minute for a very special reason, the birth of his first child hours before kickoff.

Tony Agolini and his dad have been University of Florida football season ticket holders for the last 40 years.

“Just really became a bonding thing between my dad and I and it’s made it through all the years,” said Tony Agolini, Gators fan.

They go every year to Jacksonville’s Florida-Georgia game and when Agolini got married, his wife joined the stands.

But this year, the couple had a baby on the way, due the same weekend as the big game.

“Kinda became a joke she would come during half-time of the Florida Georgia game, I thought she might come early last week or this coming Monday,” said Agolini.

Instead of the annual golf and pre-gaming on Florida Georgia Friday, Tony and his Mary were in the hospital welcoming baby Kate into the world.

“You build it up in your mind that it’s going to be an amazing experience and then it exceeded expectations, my wife’s been a total trooper through everything,” said Agolini.

This is the first Florida-Georgia game Agolini’s has missed since 1984. But his tickets will still go to use, after he sold them to some gator fans.

The couple still plans to watch the game from the hospital, after getting some much-needed sleep.

“I might need toothpicks for my eyelids we got about an hour and a half of sleep last night, but we’ll probably do our own little party here with some of the hospital employees and have a good little day of it,” said Agolini.

The family does plan to come to the next Florida-Georgia game and they plan to bring their new little bundle of joy with them.