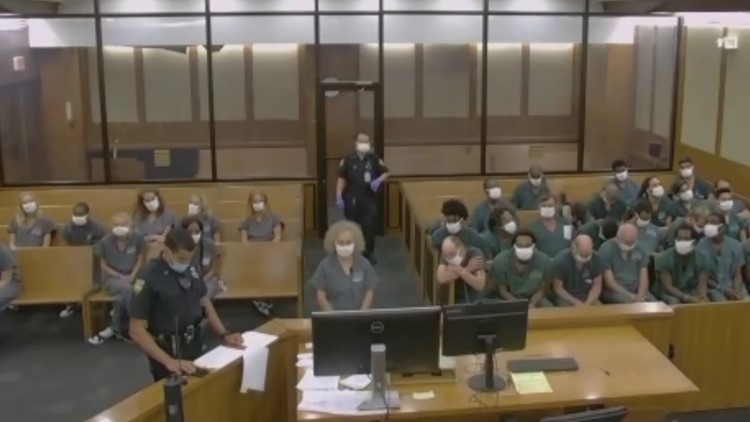 Caroline Lee is being released without having to pay bail. However, she must not have contact with the victim nor return to Darnell-Cookman.

JACKSONVILLE, Fla. — A recent nominee of the Duval County Teacher of the Year award made her initial court appearance Saturday morning in Jacksonville.

Caroline Lee, 60, is charged with child abuse after an alleged encounter with a student turned violent, according to an arrest report.

The judge allowed Lee, who was shackled and wearing a gray jail jumpsuit, to be released without having to pay bail. However, she is barred from any contact with the student she allegedly abused and will not be allowed to go to Darnell-Cookman School of the Medical Arts, where she works.

She was named the school’s “Teacher of the Year” nominee earlier this month.

Following the announcement, an Instagram post made by DCPS congratulating Lee on her “Teacher of the Year” nomination. The arrest report indicates that a student commented on the post questioning if Lee was the same teacher that used the “N” word in class last year.

Lee responded to the student saying the word was only used in the context of the book “Of Mice and Men” and the student responded that this was not the right thing to do in a classroom, the report says.

The student told school staff that when she arrived to school Friday, she was informed that Lee wanted to speak with her, the report says.

Video captured shows Lee walking ahead of the student to her classroom, the report indicates.

The report says that once the student was inside, Lee closed the doors and asked why she threatened her. The student said that she responded that she did not threaten her and then Lee then struck the student with the heel of her palm, causing her to bleed, the report says.

The student said Lee continued to strike her and when she tried to stop the blows, Lee hit her in the leg, the report says.

The student reportedly said she was told to “get out” after the incident by Lee. The report indicates the student then went to the school’s guidance office, where school officials noted visible injuries.

When police spoke with Lee after the incident, she said she felt threatened and felt the need to confront the student, the report says.

The report indicated that Lee denied closing the classroom door and that she did not cause the student physical harm. She said she also asked for the removal of the post the injured student made involving the “N” word.

The report says that based on video footage and visible injury to the student, police made the arrest.

It is very disappointing, but I am compelled to share with you that one of our teachers was arrested today on campus for child abuse. Even more disappointing, the teacher arrested is our recent teacher of the year nominee.

This arrest stems from an incident that allegedly occurred today involving one of our students, and I have been in contact personally with that student’s family.

While our processes assume innocence, these allegations and the resulting arrest are obviously far below the standards and expectations we have for our school. We pride ourselves on providing all students with exceptional instruction preparing them for the best colleges and rewarding careers. This type of behavior is not tolerated here or anywhere in our district.

The teacher has been removed from the classroom and will not return, pending the judicial and internal procedures.

My team will continue to cooperate with all investigations into the matter, and as these investigations conclude, we will take appropriate action. Thanks for your attention to this and despite the nature of this news, I hope you and your children have a great weekend, and I look forward to seeing everyone on Monday. Good bye.”

“This allegation and the arrest are beyond disturbing. What is alleged should never occur — ever — especially in a school setting,” said Superintendent Dr. Diana Greene in an emailed statement. “I have no tolerance for adults who harm children, especially adults in a position of trust. We will cooperate with all investigations, and pending those results, we will take the actions necessary to stand up for and protect our students.”