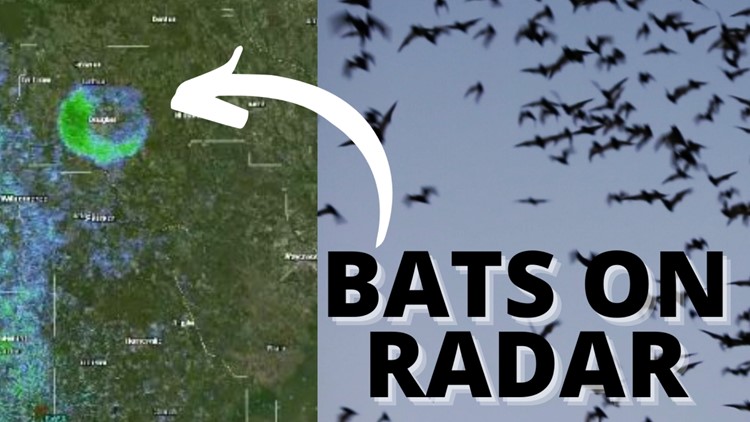 JACKSONVILLE, Fla. — A sight fit for Halloween this week across south Georgia — an odd ring showing up on doppler radar in Valdosta. The skies were dry. There was no fog.

So, what caused the expanding donut-shaped feature? It definitely wasn’t precipitation.

The answer is simple: BATS, and a LOT of them!

Radar echoes can detect much more than just rain. It can track smoke plumes and hail, but also animal migrations like birds, insects, and even bats.

On Monday evening, a colony of bats in Coffee County was headed out into the night sky for dinner! The radar echoes captured them coming out of their nests and dispersing to find food.

Forecasters are able to differentiate between birds and bats based on the pattern of movement and timing. Birds, for example, will usually leave their nests in the morning hours. This week’s instance happened in the evening around sunset.

The National Weather Service in Jacksonville posted a GIF of the bat spotting on Twitter.

🦇 The Coffee County GA bats made another guest appearance on KVAX radar this evening. They must know Halloween is coming up! 🎃

🔍 Spot the bats by looking for the expanding ring shape. The radar is seeing the colony of bats heading out for the night. pic.twitter.com/xPVK0Ss04p

According to the University of Florida, bats normally emerge during a 15 to 20 minute period after sunset, before it turns totally dark outside. They prefer warm, calm evenings when temperatures are above 65F. High winds, heavy rain, or cold temperatures will deter the bats from leaving their nests.

If you’ve never visited the UF Bat Houses, it’s quite the experience and attracts hundreds of people every year! Here’s what it looks like when they leave their houses at dusk.

Here’s an inside view of a UF Bat House. Creepy or cool? We’ll let you decide. Happy Halloween!

The Coffee County bats also made an appearance on radar in August of 2021.

📡 KVAX radar spotted this interesting expanding donut-shaped feature in SE GA this evening! We usually see these in the morning as birds leave their nests. We’re not zoologists, but we’re thinking bats? What do you think? 🦇 pic.twitter.com/HrMHf0itMF

Here are a list of BAT PUNS for your entertainment:

RELATED: LIST 🎃 How to celebrate the spooky season across the First Coast