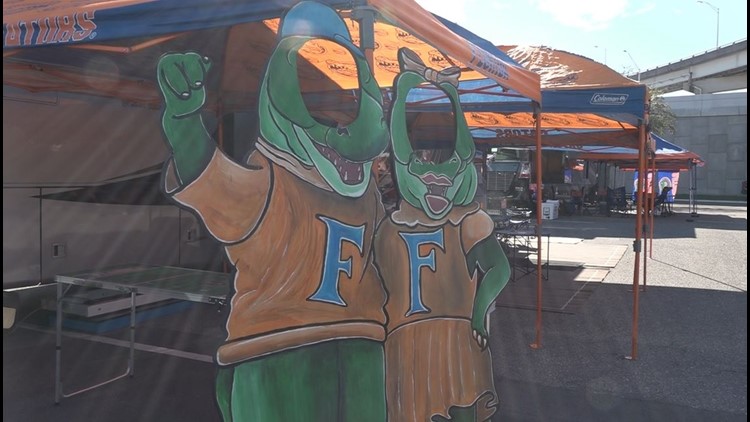 The concert starts at 5 p.m. at Riverfront Plaza.

JACKSONVILLE, Fla. — Florida Gators and Georgia Bulldogs fans are gearing up for a weekend filled with fun.

“It’s entirely free. We’re going to have food trucks out here,” said Paola Lorenzo, City of Jacksonville Sports and Entertainment. “Performers will be JHP Entertainment, DJ Jake. Then we’ll have Who Rescued Who and Briteside, all local producers of entertainment.”

RELATED: Everything you need to know ahead of the Florida-Georgia game

Fans like Ken Scott say it’s been a week of waiting.

“We came Thursday of last week and started preparing, dropped the RV off and been coming back and forth,” Scott said.

Fan Richard Dean, also known around town as RV City Mayor, says days leading up to the weekend are the calm before the storm.

“Thursday evening they start going,” Dean said. “Friday gets pretty wild and then Saturday, starting at like 8 a.m. people roll in and it’s a game-changer then.”

“There’s going to be tons of people down here, so we just have a couple of nights of quiet, then it’s chaos after that,” Scott said.

Lorenzo says other events leading up to the game will be baseball, fireworks, and on Saturday morning, the FanFare.

“We’ll have football, lots of different activities for the kids, totally free to participate and for pretty much all ages, and we’ll have giveaways and things like that,” Lorenzo said.

For more information on events, tickets, and parking click here.

RELATED: Dozens of Florida and Georgia fans line up ahead of RV City opening